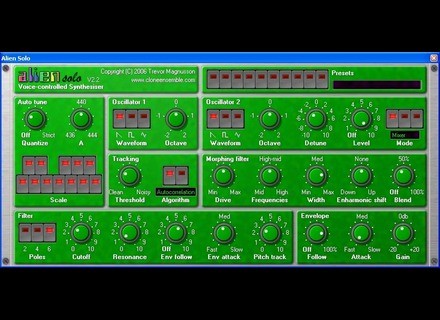 Clone Ensemble Alien Solo
5
The Clone Ensemble Alien Solo plug-in is a piece of shareware that's basically a voice controlled monophonic synthesizer. Throw this guy up on your vocal track and your voice will guide the melody. It's not completely free, but you can get a limited free version of it. It's available as a Direct X or VST plug-in, and only for Windows operating systems I believe. The plug-in has two separate oscillators, along with sections for a filter, envelope control, a morphing filter, tracking, and tuning control. This is great for when you might have an idea that you want to sing and turn into a synth sound, or just as another way to get your synthesizer sounds. It should be an easy enough synth to use where a manual isn't necessary, nor am I sure that one even exists.

I used to have the Clone Ensemble Alien Solo synth plug-in running on my old system when I used Cubase SX. Now that I have Pro Tools on a Mac, I can't run it, but when I did it was on a Hewlett Packard Pavilion dv8000 Notebook consisting of 2 GB of RAM and a 3.0 Ghz processor. This was enough for me to run this without any issues, so I think most users will be fine running it themselves.

The Clone Ensemble Alien Solo synth plug-in is awesome! While not exactly free, it's about as close as you'll get without it actually being free, as you just pay a small fee for the full version. I haven't used too many other synths where your vocal track can be processed into a synth, and if I remember correctly it can also work with non-vocal tracks as well, though not as well. This will definitely transform your voice into an analog synth type of sound, and a pretty good one at that if you know what you're doing. If this kind of synth appeals to you, as it should, I'd highly recommend at least checking out the limited free version if you've got a system compatible for it.
Did you find this review helpful?yesno
»