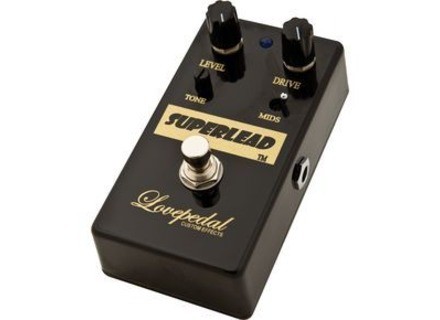 Dewy's review (This content has been automatically translated from French)" that trunk!"

Lovepedal Superlead
5
It's a distortion pedal ... yes I know still is not very original.
But it is a Lovepedal, and just for that, we had to try it because since I was stuck in the Babyface legs, I admit that I expect quality products.

There are the usual buttons, a volume, a drive, a tone and an additional switch to activate a sort of "boost" in the mediums (for example solos).
Input jack, an output jack and power supply.

Given the name, saw the color, we are faced with a "tribute" to the good ol 'Marshall Super Lead "in the format of a small pedal ...!

Very simple setup saw the buttons, no need for a guide to say nothing, there's just a small card explaining the idea of the pedal.

I liked the boost trigger medium with a second button at the bottom rather than a small switch to turn by hand.

Wow! It's a pedal that's safe, it's like really good plugged into a big stack british!
A drive crunch is beautifully cut, it grows more and more we come to a great distortion, which will sustain a big fat if you go solo.
I tried it on a small Marshall Class 5 (beautiful little combo by the way) with a Gibson Les Paul Studio (2010).
We let ourselves be carried away by the beauty of sound, everything goes. Nice little rhythm in slight distortion, long solos, harmonic ... ! Happiness.
The sound is really realistic, bass are present (if you play in an intermediate position at the microphone is capturing) ... yet the speaker is not a 4x12 ..! Rock it, it's clean, it's powerful (not metal, much less aggressive than a Rat, for example).

Probably I will complete my opinion now that I bought. It's really a great pedal.

It allows your muscles configuration allowing it to achieve the sounds of a big stack, without lugging the amp. Please note, we are not talking here of modeling, it is a "simple" distortion pedal, but boosts good "best frequencies" pleasing to the ear. Quite impressive.

Importantly, it is apparently only available in the Guitar Center chain of stores in the U.S., and it is a pity because she is "super" for a pedal affordable "boutique" (usually these are small series, but as This super lead was "commissioned" by Guitar Center, there is no serial number ....). Since we now come to find Lovepedal in some stores in France (including a certain village ...), hopefully some will be lost to us. Anyway I hope you do because it is worth the detour.

See all 20 photos of Lovepedal Superlead »