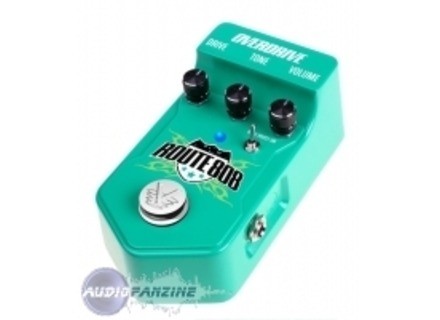 Route 808, Overdrive pedal from Truetone in the V2 series.

FoxMusic's review (This content has been automatically translated from French)

Truetone Route 808
5
It is a small effect pedal that can complement its line of his (guitar + amp) with a good distortion.
As its name suggests (Route 808) it is close to a tube screamer, at any style you can scan with the unit.
The effect is analog.
a small switch to boost bass
Very simple, a jack input and one output.

Three buttons to adjust the beast.
1. the drive to increase or decrease the saturation
2. Tone for a clear or muffled (but still we hear lol)
3. Volume, bein here is not complicated, either you set the output volume of the pedal.

With three buttons are made sauce, it's not complicated at all.
The manual? Bein It consists of settings that's all, like blues, crunch, rock up I think ... Anyway there I can not tell you more because I lost, it was so small that ... But it's hard to deal with three buttons, either.

I use this pedal to compensate for a lack of distortion on my hot rod deluxe.
My amp is great, 40W All Tube, but it is good enough focused its clear crunch, along with the fender is normal. I have two guitars, a Start and a half case.
I use it is in good distortion,
by boosting the drive to 3 / 4 no more) and volume (large max 3 / 4, ca saturates more lamps of the amp)
or also by the drive to the mini (or almost) almost the tone and volume to the mini to 1 / 4. This gives a really jazzy sound. And the pedal a little color the sound, with a small cozy atmosphere, really nice.
Then we can boost the bass, it's really good! I put it almost all the time.
For activation is entitled to a super "button" that does not make any noise (like the pedals boss) and a blue LED power, it changes the usual red.

I use it for a month and I'm not disappointed.
American equipment is in analog, high quality, it's solid.
The connection jack is very good.
What I am the least? Uh ... I like bein all, the fact that some pédamle color sound may be a concern I think in some styles, but hey it's me not bother me.
I listened to a lot of testing on the net of pedals, this one and others, I tried a few planks, but I wanted to have good versatility, not only have a fully saturated. where I can pick on a lot of genres.
At price / quality ratio is correct, at least for me. I bought it on the net for my music store (and others) did not Avias and will not be able to order just one, and as he knew too much visual sound, it did not take the risk. I had to € 94 new U.S. store.
Since it's been a month since I have that choice I do it again without hesitation.