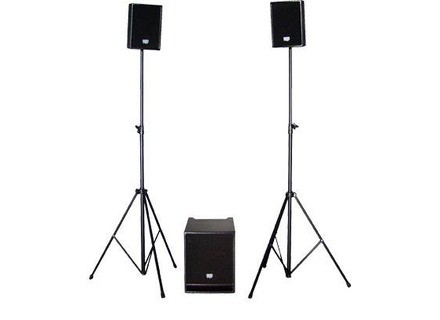 magmax's review (This content has been automatically translated from French)

DAP-Audio Sound Mate Easy
1
- How long have you use it?
I used one week and I was far enough ...!

- What is the particular feature you like best and least?
Most: transportabilit trs well think of Systm (HK thank you because that is exactly the same as lucas xt or smart!) And the finish is honest to a system trs I sold 500 euros on the net ... but ...
Cons: ds the first ignition is dchante quickly, we are surprised by a blast and trs Submitted indpendant all rglages. I who am in ingnieur ELECTRICIT I even tried to open the beast it to improve it, but nothing to do, the noise is of poor quality components (this price is would have been almost expected!)
Then, the sound is pretty decent for someone almost deaf, in fact, from the breath omniprsent, then a make a huge hollow in the lower mdiums and an overabundance of treble that makes the listening of cers pregnant trs tiring (I had pain in the head about 1 hour!)

- Have you tried many other models before acqurir?
I possd owns and I also Systmes other sound, and even the most modest of them (the first speaker PA amplifier prices and AudioPhony 200Wrms 2 *) is a better sound. In addition, I who wanted a small amp numrique Systm (not unlike my lucas1000 fan) to the lower cost level, the breath of the amp does not allow it!

- How do you report qualitprix?
Good value for money and is not even on yet! At about 500 euros in Germany on the net, I even know how to make it so that each gets its benef Game!

- With the exprience, you do again this choice? ...
No, I strongly deprecated by those who want only to make presentations at fairs micro! For the same price, I recommend two speakers rather cheap and making a more polished receiver.
Did you find this review helpful?yesno
»