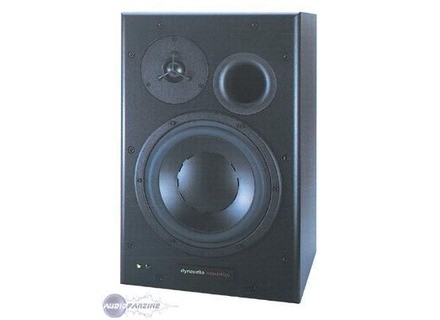 BM15, Passive Monitor from Dynaudio in the BM series.

The BM15 is the largest and most powerful speaker within the BM Passive range and is designed for any studio application where higher sound pressure levels and extended low frequence response are required. Its astonishing power handling and full range extended bass response makes it the perfect alternative to wall mounted main monitors, particularly for commercial studios, project studios and post production facilities.

Dynaudio BM15
They sound excellent, no issues for mixing.

I use them for my professional studio.

Very neutral
Excellent, no special remarks
Everything is perfect!
Wonderful.

It's been a couple of months since I've had them.
I like best their look and there's nothing I don't like :P
Nothing beats Dynaudio (OK, except for the really high-end brands)
Their price has dropped a bit after several months, but to me they are worth it.

Dynaudio BM15
A woofer diameter according to my room and, since I have a good amp, I didn't see the need for an active model.
I use them as monitoring speakers for my creations with Ableton Live.

Fortunately, the manufacturer includes foams to mute the vents because they have a bit too much presence, but the foams limit the level a bit. In my opinion they should be cut in half to have the right balance, unless you are close to the walls.
But its the mids that make me most unhappy, they are very shy, they just don't come through. That's where my letdown comes from. I'm disappointed compared to Genelec and the tapco S8. The highs are discreet and of good quality.

I kept them two months, after several comparatives and listening tests. They are quality speakers that handle power pretty well, but they lack that little something. Technically, a woofer with a smaller diameter would've help keep a better overall balance. So be careful with the use you want o give them. They are OK for electronic music or high-volume listening, but watch out if you use them for accurate vocals, for example.
Did you find this review helpful?yesno
»

Dynaudio BM15
5
These are another pair of monitors that are used frequently in the studio that I work at. They are the passive versions of the BM15A, which we tend to use most regularly at the studio. These are passive, which means that they require the external power supply in order to work. I tend to prefer using the active monitors, but these are effective to use as a comparison. For instance, when something sounds crystal clear in the active monitors but still sounds muddy in these, that means that a few slight edits could drastically improve the mix in general, and it will sound better on both. It's not always so cut-and-dry, but having another pair for contrast serves us well over here.

The stereo image on these monitors is really great. It's not much worse than its active cousins' image, but it is noticably different. The low end in particular is slightly muddier, but only in comparison. Compared to most monitors I've used, the low end sounds phenomenal. Obviously the high end is pretty great too. The dynamics get the full treatment here, there's not any excessive compression in these speakers. The speakers tend to be really clear in general. There is absolutely zero coloring from these monitors.

These are pretty massive sounding monitors. While we are spoiled over here in being able to use them in tandem with the BM15A's, I want to make perfectly clear that these are absolutely phenomenal in their own right. They are expensive, but less so than the BM15As, so for those of you for whom money is a factor, this is probably the way to go. Most likely they can handle any project you will get. I really can't stress enough how good they are.
Did you find this review helpful?yesno
»

Dynaudio BM15
5
The Dynaudio Acoustic BM15s are a set of passive studio monitors designed for any type of use in the studio.  Since they are passive monitors, they do require an external power amplifier.  These monitors are pretty big so they aren't the type of monitors that you can bring around too easily and are better of staying put in one place.  The Dynaudio Acoustic BM15s are suitable for mixing, monitoring, or for whatever else you'd like to do with them.

The sound heard from the Dynaudio Acoustic BM15 is pretty awesome as it covers the entire frequency spectrum really well.  The low end response is awesome as is the mids and highs.  You can hear everything precisely and accurately and you can rest assured that the sound that you are hearing is accurate and isn't coloring the sound at all.  For this reason they are probably best suited for mixing and therefore are great for any type of use.  The stereo image is great and the dynamics are quite accurate as well.  The Dynaudio Acoustic BM15s are overall really great sounding monitors.

I recently got to use the Dynaudio Acoustic BM15s for the first time and right off the bat I really liked the way these sound because they are really full of life.  They have a huge sound to them but at the same time it isn't an unrealistic one and you will be able to get good sounding mixes that will transfer well when you play them back on normal speakers.  The price of the Dynaudio Acoustic BM15s isn't absurd and is actually a pretty good deal for such a great set of studio monitors.  I've just recently really come to respect Dynaudio for their monitors as I hadn't had much experience with them before.  If you are looking to spend a little bit of money to get a great set of monitors, you have to check out the Dynaudio Acoustic BM15s and the other monitors that they have to offer.

Did you find this review helpful?yesno
»
Read the 5 user reviews on the Dynaudio BM15 »