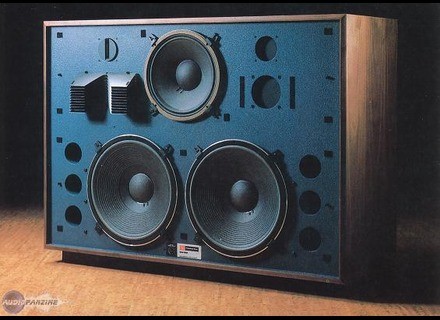 JBL 4350 monitor
5
Lasting memory of the former HOUSE OF HIFI Porte Maillot, the glory days of the golden age of stereo, well implemented, the top floor, it's the "doing" as they say!

When one is still in the discovery of the stereo with a dual channel, the shock! It almost never accesses to such an impact and physical presence of such performers, and it is packed with details.

That said, a little digging, the successful implementation of these monsters is more complicated than it seems ..

First, it required a bi-amp, we can not even use them as a liability to try!

Then this model, unlike the other four tracks the series has no adjustment for the passive part of the filter, and we would like to calm the two-inch compression expressed a little too low compared to the medium 30 cm, yet high performance. This issue had also been fixed in the next release, 4355's, much less known in our area ...

It is a model for many developing, not turnkey ready, the room must be related result, the speakers raised, in short it is not accessible to everyone, but the potential is real If you do not want to count the hours we will move to the implementation ...

The presentation will not facilitate horizontal integration in the room, especially since it will leave a vacuum between the two ...