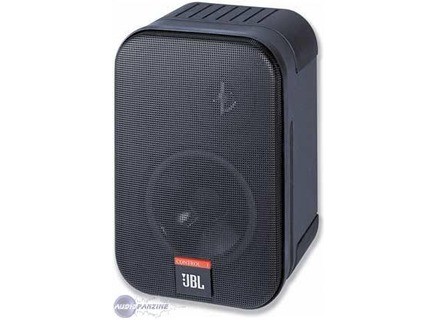 JBL Control 1
4
I got a pair of JBL Pro Control 1 because, like many, I feel that the mixes I get on them translate well to other listening environments. They are pretty normal speakers, which is part of the reason that so many people love to use them to A/B mixes. I run my pair with a Crown D75 power amplifier.

I would say these monitors give a pretty accurate portrayal of the sound, excluding the low end frequencies. They don't have enough bulk to project those deep low frequencies, but the mid and high end frequencies come in pretty clear. Since the low end response on these isn't the best, you have to know what amount of bass is appropriate on these to translate well to a set of speakers that might have more low end response. This being said, all monitors take a bit of learning to see how accurate their spectrum is. The stereo image is more than satisfactory and they give off a crisp overall sound.

I've had my pair of JBL Pro Control 1 for about three years and I'm really glad I bought a pair of these. They are great to use in tandem with a fuller set of speakers so that you could A/B a mix between them. If you can find a used pair of these, they aren't all that expensive, which make them a good deal. The JBL Pro Control 1 seem to be in a class of their own when it comes to monitors. Some people love them and swear by them, while some just don't get it. I think it is just a matter of knowing how to use these to your best advantage, which takes a bit of learning. The JBL Pro Control 1 are definitely worth a look at from anyone interested in picking up a set of studio monitors.

JBL Control 1
1
(Originally written by EricMa62/translated from Audiofanzine FR)
I used them ten years but they are now broken, the woofer's surround broke (and I believe I'm not the only one with that problem).

The sound quality was good and I think it's the minimum you can expect considering the price. The value for money is not good.

If I could choose again I would spend my money on another brand.
Did you find this review helpful?yesno
»

JBL Control 1
5
This speaker is a Russianness of JBL.
It sounds good, does not dnature sound, but do not ask for too much bass.
The ideal is to associate a bass cabinet of the same brand (and not go work bowl with JM LAB hi fi, GROSSIRE error) LSR series genre.
It is blind, more if you place proximity TV screen.
And for the info, I have seen in the tropics Saint Domingue and Martinique.
So she treats, bravo JBL.
In terms of the association with the amplifier About Thomann of +/- 40w, the still is a mistake in terms of its power and configuration, unless the Last is used in very low-volume enclosure atmosphere in a restaurant for example.
Listen a monitor, his first vocation, I recommend a minimum of 2 x 100w amplifier types CROWN XTi XS or which is more than enough.
In order to facilitate the time goes and dynamics.
Manufacturing quality is excellent.
Please note the reference number, and only require CONTROL 1 pro.
There are in the same range Hi Fi.

- FREQUENCY CURVE is perfect for this speaker GRADE.
- The image strodpend primarily the sparation of an amplifier channels and front, pramplificateur and / or mixer.
- The opening image of the sound spectrum is good, JBL definitely knows his mtier.
- The sound is this type of enclosure. It is realistic, what is proper JBL, and the voices are prsentes, which is rare on this type of enclosure.
- The dynamic is perfect with a power handling unusual.
JBL makes this place for over 10 years found around the world in scores of recording studios, including the most prestigious.

I participated in the use of this speaker repeatedly mixes, all of which have t russis
- PLUS: it sounds very good in its category, this is the best. the sound is fine and balanced prcis.

- It is imperative to associate a bass box in the same kind brand for LSR SERIES
mixes funk, soul and rock. NOT FOR SPEECH.
- DAMAGE THIS SPEAKER IS MADE IN CHINA, but in a JBL / HARMAN factory not
as 80% of brands, pure outsourcing is hard. SO IS THE QUALITY RV 100%
- I am not owner, I always work with my mythical references, global references that are the JBL 4312 still used also in many studios, not least like what we do not change a recipe overnight. The series dates back to the 43's !! 70. I cost of monitors finely crafted signs TANNOY.

- The quality / price is excellent especially as the product is manufactured in China, alas my opinion, but THOMANN really sell the hyper comptitif price.
- I recommend this product that is a veritable justice all young people who start
in the sound. With larger resources, investment rv as the JBL LSR series.

KNOW they have the most experience, and why?

JBL and TANNOY are the inventors of this small speaker with the MONITOR name
Did you find this review helpful?yesno
»

Zenon18's review (This content has been automatically translated from French)

JBL Control 1
5
How long have you use it?

For years. I have to buy a small price (95 and we find less). The premires were secondhand (75 with the suspension redone).
What is the particular feature you like best and least?

Sound, really balanced especially if a box is added to it (i Focal Cub 2 in my case). It is discreet, robust, even original. These speakers are the catalog for 22 years and I aimsds our First meeting!
Have you tried many other models before acqurir?

Yes, until 1000 (amplified all the same). With a box and a good amp, they excel in coutes of proximity.
How do you report qualitprix?

At the moment, sublime, since we find it less than 100.
With experience, you do again this choice? ...dropoff Window

I just do it again ... the problem is, as noted by the member adj given its opinion, the low hard (relative) membranes. Note that this is often the case with JBL or even ultra-pro models have suspensions cooked 15 years.
In this regard, the fact of using them with a subwoofer mnage Seriously small HP ... Also found on ebay for rfection kits quite cheap (7.50 + FDP since the US) .dropoff window I will be more forgiving, even though I understand that those who have purchased this model (used in 1987 around 2,000 Frs) can be frustrs. Ten years, after all, not bad ...
Their performance is average and cashing them well enough power, but be careful not to send 100 watts continuous too often. In a small room, I also costs lots with an old Technics 40W as with an Onkyo A 9511 which is double. For the moment they take ... but as I said above I just bought a brand new pair, in anticipation of the day or premires lcheront me ...
I listen mostly jazz, classical, and it is among the few small little chres speakers that really give me satisfaction in mdium, natural, ar. With them, the music flows ... but the death of the amp prmature my first box (JBL SB 1 and PS 100 amp) made me back down to earth, the box is really essential ...
Did you find this review helpful?yesno
»
Read the 8 user reviews on the JBL Control 1 »