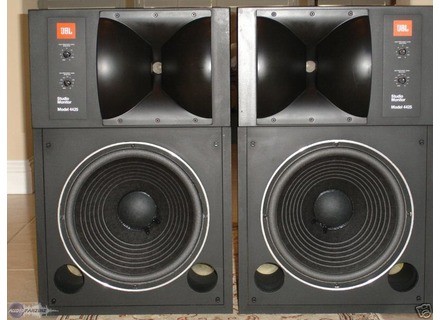 proche's review (This content has been automatically translated from French)" Excellent"

The most compact enclosure in the series "44", it uses a version of economic and non-marketed separately from the compression "2426" while retaining the major elements of the latter: the same engine, same membrane titanium diamond suspension, even a reel , associated with a 75 inch Bi-Radial horn 1 inch smaller than 1 inch Pavilion equipping Big Sisters 4430 and 4435, the connection with the HP 12-inch grave is at 1.2 kHz. The sound is characterized by a gain in overall neutrality and a more three-dimensional image of the stereo dynamics is satisfactory even though it may seem less "exciting" as the series "43" before, maybe the back of Medal of phasing more sophisticated, other features to note: impressive power handling for size and sensitive to the sound personality of the links upstream, and finally the dispersion 100 ° x 100 ° flag makes it more likely sensitive to the acoustic environment in which it operates.

I use it since 1987 after owning patterns in SONABA, Cabasse, Celeste, DCM, Triangle, the quality of the stereo image is exceptional even compared to newer models but it does give the best well-fed by amp supply current and power for large rooms; of tube amps can give very good results as well as sources to warm connotation: Denon 103 or cell-based Philips CD players for example.
The value is excellent especially compared to what is proposed today!

JBL 4425
4
Minimized version of 4430, provided of a man of 30 cm instead of 38 cm and a compression smaller and less powerful, this model adopts the same idea that these big sisters sound image issue, but remains in the lower court, it makes sense ..

It's the same idea in concept, but the flag smaller and the emitting surface of a 30cm woofer instead of 38 cm will give a much smaller sound stage.

However, it is homogeneous, built on the same basis, even if it does not play in the same court congestion and the price also takes into account, it can provide a breeding interest in the case of a mixed stereo / home cinema because it's still a safe bet that will always purchaser, in case of resale, to evolve thereafter, it counts too.

Less exciting than other older models, but gain overall neutrality ...