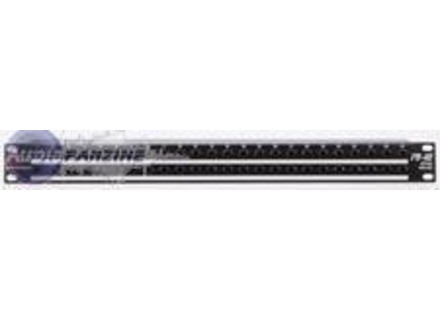 View all offers for dbx PB48 »

dbx PB48
2
The DBX PB48 is a low-cost, no-frills, 48-point, 1/4" TRS jack front-and-back patch bay. Patch channels can be normalled or de-normalled depending on how you have each module oriented--to change configurations, you loosen a plastic nut, remove each module, rotate it an re-install.

The plastic nuts are spaced close together which can make them difficult to access and manipulate, and care must be taken not to crack them. The process of removing the modules for re-configuring is fiddly and tedious. If you expect to re-configure your patching scheme very much, I would look at other bays with easier mode-changes.

The faceplates are very simple, clean and dull: charcoal metal frame and white label strip areas. I suggest using a thermal label printer with 1/4" tape for labeling these bays.

I used 8 or 10 of these bays for years until my recent installation of a vintage console with internal TT patch bay. Patching is good and solid for a while with the DBXs, but in due course you will find the need to clean the internal contacts (coating a patch cord end in Deoxit D5 and inserting it several times in each patch point will do the job. Due to poor chassis rigidity and flimsy plastic-nutted module mounting, the modules are very prone to cracked socket solder joints on the module PCBs with continued use, which will cause intermittent connections and incorrect signal levels. I was pleased as punch by the time I upgraded patch bays and retired the dbx bays after about 5-7 years of service because they'd gotten to a point where I was having to pull and re-solder modules all the time just to keep the studio usable.

I have also owned and used similarly priced and classed bays by Re'an and Neutrik. I consider the dbx and Re'ans to be very low duty, suitable for a light-use home studio and no more. The Neutriks are the best of the bad bunch, easier to reconfigure, a little more rigid hence a little better life expectancy, and good connectors.

It would be a better spend of money for more serious or frequent patchers such as commercial facilities or frequent-use home studios to to bite the bullet and look into more expensive, slightly more permanent but better built, more difficult to install BUT more efficient, reliable and professional TT/Bantam patch bay options with multipin quick-connects or hard connection terminals on the back. The patch points on my 31 year old MCI console are much more solid and reliable than a ~5 year old, routinely used dbx PB48...let's put it that way (the dbx bays sure install easier, though!) Again, in a light-use home situation, I expect they would be longer-lived and just need periodic cleaning.

Sonically, well, you're always going to lose a little something with the additional connections points a patch bay adds to the signal chain, and this rings especially true with jack in, jack out bays like the dbx PB48, but beyond that, these guys don't do anything especially horrific in a worse-than-average sort of way to the sonic quality of the signal. They're no better or worse than other similar bays in this regard...er, until you've patched one too many times, the solder joints start letting go and your signal starts getting wonky.

dbx PB48 manuals and other files