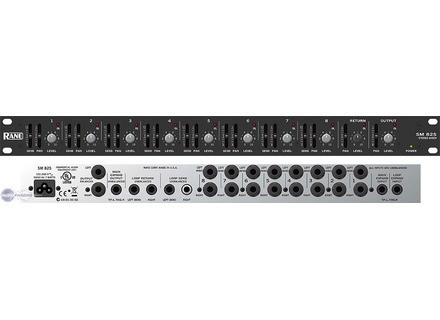 Rane SM 82S
5
The Rane SM82 S is an eight channel stereo mixer that will fit in a single space of a rack casing. There is a lot that you can do with the SM82 S, as it has a lot of versatility in terms of connection and routing options. Something like this is really designed for those who don't have a mixer and want something to run everything through for easy routing and convenience. It doesn't have any microphone preamps or anything like that. As far as connections go, each of the eight channels has stereo 1/4" inputs, in addition to a set of stereo 1/4" balanced outputs, and stereo 1/4" unbalanced loop returns and sends. It also has a TRS main expand unbalanced output and input in addition to a loop expansion input. In terms of the front panel, each channel has a pretty simple configuration, containing sliders for your send levels, pan, and a knob for your overall level. So really once you've got everything connected to the Rane SM82 S, there isn't too much that you need to worry about in terms of setting controls. You really don't need too many parameters with something like this, so it's definitely a good thing that it isn't too convoluted. Where the SM82 S makes it's money is in it's versatility in terms of connections and routing. It will make it a whole lot easier for those without a console or another mixer, as it conveniently puts everything in one place. The price of the Rane SM82 S will absolutely attract a lot of people to this, as you're getting a high quality eight channel mixer at a price you won't often see something like this at. Something like this isn't necessary for most home studio owners, but if you're looking for a compact eight channel mixer that will give you flexibility, don't overlook the SM82 S.