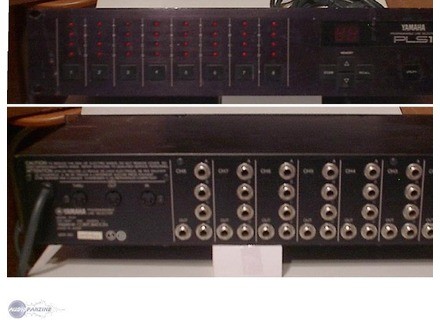 Yamaha PLS1 Midi Controlled Audio Switcher
5
- How long have you use it?

8 years. He accompanied the evolution of my studio.

Most is that it replaces dozens of patches jack! It's just a patch in about 8 out 32 (and can be reversed in 8 to 32 out, mix the two previous configurations, or can also be used as channels Switcher for guitar amps, or as router ...... the possibilities are enormous!). And as all settings are saved in MIDI, it's great to find her little .... especially when many devices are available and that we work in analog.

There were only two existing models at the time: a Tascam and Yamaha. The Tascam available in addition to VCA (so you could also use it to make automation) but had a different architecture (matrix 8x8 + 8 + VCA patch memory 16 entries) and priced even higher (in 8000 F € -1200 -). In fact, the Yamaha playing alone in its class and then had to type in memory patches studio pro, but here we had three generations of debt!

Paid almost 5000 F (750 euros) at the time, it was expensive but he was worth it! I am surprised by his side .... ok, I just watched, it is unreasonably low because it is someone who seeks one. I think this kind of machine can be traded in the 300 euros and it's still a pretty good deal .... because there is no competition!

Yes. Unless you have enough inputs available on the console to do without .... this little toy can "win" 32 votes out of a console, and the fact that it has memories and MIDI is actually an instrument of rare quality. Maybe I'd sell the future to the extent that it serves me almost to the month that I recycle for another use (eg switch ....).
Anyway, if you use standard patches in your studio and you see a pass, please, it will change your life!