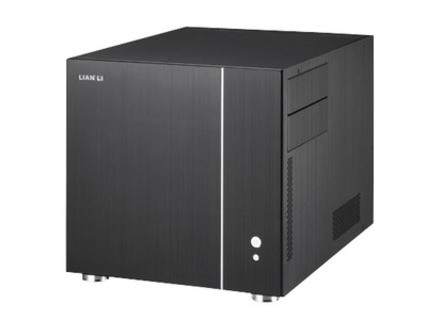 Lian Li V350B
5
Purchased after much research to install a dedicated PC home studio, I had a serious silent and efficient solution.
I compared the long boxes in 19 "rack and outside a deterrent enough for the price it is mainly the size of V350B that made me take the plunge: 262mm wide, 279mm high and 373mm deep (excluding cables). Caution, however it is a box that only supports MICRO ATX cards, which asked for a change of motherboard. reader / CD burner / DVD / BR can not install on the side of the case, but it is not a disability at the time of USB over 8Gb.

Installing the OS and software on the SSD, there is still 40Gb free once Studio One, Reaper and base plugins installed. The Raptor serves me as recording disk (until replaced by another SSD), the disc has a role tera storing songs and audio and MIDI banks (four partitions just over 200Gb for ).

The machine is very quiet, you can hear little despite the Raptor at 10,000 revolutions / minute supposed to be quite noisy. No overheating problem with the three 80mm fans that come with the case, to which I added an old 80mm Papst that was lying in a corner, in addition to the fan power.

Why this case?
The answer is simple, it is well built, elegant and can be brushed black thing (aluminum) so HiFi, silent, and mostly it goes without flinching in a shelf unit from Ikea EXPEDIT! No rack in the living room (which I use home studio a few hours per week), a discreet and rather upscale housing. Great buy even if you have to be methodical and patient at the time of installation (as with any computer configuration).