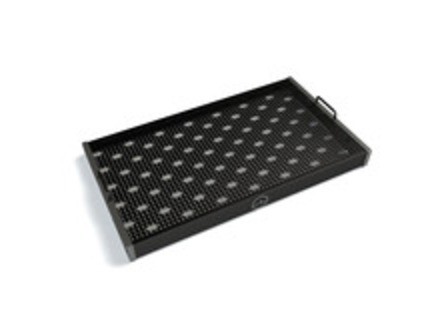 All user reviews for the Temple Audio Design Trio 28

6 photos
Used to shelter the 3 Strymon (Timeline, Bigsky and Mobius), an Origin Effect Cali76 Compact Deluxe, the Xotic Wah and SL Drive, the TC Electronic mini Spark, polytune mini and Ditto looper, the Boss DS-2 and TC Electronic Spark (both used for vocals), plus the huge Boss ES-8 footswitch and two supplies, the Strymon Zuma (under the pedalboard) and Ojai.

So yes, the Trio offers plenty of room, and that’s exactly what I expected from it. Looking closely at the PB reveals lightweight yet high-quality materials. The two handles (one on each side) allow moving it easily, which is all the more appreciated considering its weight once fully loaded.
Underneath it is a reinforcement bar. A power supply can be put between it and the pedalboard.
On the sides, spaces allow welcoming various modules.

The concept behind the Trio28 is that of an extremely modular PB able to adapt to every musician’s needs.
- one or several plates of various sizes (small, medium or large) are to be put under each pedal. Each plate has an adhesive side (to be fixed under the pedal) and another side with a notch in each corner that fit the pedalboard’s small holes, plus a screw in the middle that will allow to secure the plate to the pedalboard. Please note that the plates are to be bought separately (pr approximately $/€4 to $/€5 each), and you may need several of them for a single pedal, for instance 3 large plates for the Es-8, 2 mediums for the Wah, one large and one medium for each Strymon, one small for each mini-format pedal etc. Once fixed, it’s reliable and won’t fail, plus it’s very easy – once set in place it won’t move. I turned the entirely loaded pedalboard around and nothing moved, even considering the ES-8 alone weighs in at a solid 6½ lbs. There’s also a kit with a cleaning product which is available to unglue the plates easily.
- running the cables: the pedalboard has holes all over, allowing to run the cables as you like. Please note that the smaller hole aimed at fixing the plates can also be used to run some small cables, eg Disasterplug Cable Kit, so again it’s very modular.
- the side modules: various screwable modules can be bought separately for use in the dedicated space sides. I put two 4-jack modules which allows to plug easily all of my cables (guitar input, pedalboard output to amp, the loop’s send and return, the vocal mic’s input and output and the amp’s channel control output). I also use a very practical module which allows to plug the power supply directly, but several other models are available such as USB, MIDI and so on.
- reinforcement bars can also be added under the pedalboard to make it a bit more rigid

In the end:
Well-built, easy to use, sturdy once everything is fixed, nothing moves: the Trio28 is much, much better than Velcro-based PBs, and yet in case you need to move anything just unscrew the plates and here you go!

Of course, it is terriblt heavy once everything is installed on it, but this is the logical consequence of a PB with so much gear on it. Everyone can do exactly what he wants with it, which is great. To me, it’s the best you can get, so I have no hesitation giving it a 5 stars rating.

Now, the only fault I can find with it is its price. Granted, 133€ for the basic pedalboard is more than acceptable in itself, but once you add the 89€ softcase, all the plates you need (consider a total 50 to 100€), the (50€ each) modules if you want everything arranged cleanly, a 20€ reinforcement bar and so on...

Taking only the basic pedalboard makes it less interesting, so I mostly advise it to experienced users who are after a reliable and customizable pedalboard and are willing to make a real investment.

PS: I’m adding a few pics to make the concept more explicit
View price information
Did you find this review helpful?yesno
Cookies help us improve performance, enhance user experience and deliver our services. By using our services, you agree to our use of cookies. Find out more.