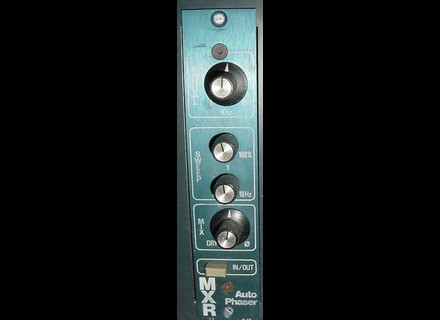 Right off the bat I found the MXR M-110 Auto Phaser easy to use. It's pretty straight ahead in terms of the parameters that it has to offer, although some of them aren't typical for a phaser. It's simply got three separate setting controls that includes manual, sweep frequency and sweep percentage, and overall mix level. It also has a button to put the effect in or out, but that's really all that there is to it. Finding a manual for the M-110 would be near impossible...

There is definitely a whole lot that you can do with the MXR M-110 Auto Phaser in terms of different sounds. It's awesome of getting full sweeping type effects, as well as for subtle phasing. I've used the M-110 on a few different applications within the same session. On one song I used it for lead vocals, which gave us a kind of haunting, Led Zeppelin reminiscent, type of sound. Here I used it more subtly, but then also used it widely on a previously recorded electric guitar part, which really added some spaciness and uniqueness to the sound. I definitely found this to be a versatile phaser, as much so as most phasers that I've used...

Getting your hands on an MXR M-110 Auto Phaser would definitely be a hard thing to do. This wasn't the type of gear that I sought out whatsoever - it just happened to be available in the studio where I was working at and we decided to give it a whirl - perhaps because it looked so cool! If you are able to try one of these out in a studio or do get your hands on one for your own studio, I think you'll be very happy that you got to experience with the M-110!
Did you find this review helpful?yesno
»