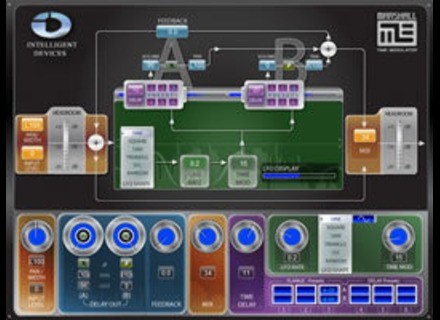 Intelligent Devices Marshall Time Modulator
5
The Intelligent Devices Marshall Time Modulator is a software version of the extremely rare and highly sought after Marshall Time Modulator, which is a unique effect that offers synthetic doubling, flanging, and other similar effects. The original Time Modulator was used on countless classic recordings, but you're definitely not going to find too many of them still and working. That's where this plug-in comes in, as it's actually licensed by Marshall and is the only software version of the Time Modulator that I'm aware of. I didn't install this plug-in as I don't own it and have only used it in the past at one of the studios that I used to work at. The plug-in gives you a lot of the same control that you'd get with the original, as the interface in general is great as you can easily route your signal anyway you'd like to give you all sorts of different time based modulating effects. I don't find using it to be extremely difficult, but there's a whole lot that can be done with it and it will definitely take a little bit of time to learn all the ins and outs of it. A manual would be a good idea if you've just bought this plug-in, but I never had an opportunity to look at one.

The studio that I used to work at had the Intelligent Devices Marshall Time Modulator running in their Pro Tools HD based system. The studio is no longer there, but when it was it had an Apple G5 computer, Pro Tools HD, Apogee converts, and a Neve 8108 console. I don't remember the exact specs on the computer, but it was definitely a powerful one. Since the system was HD, this plug-in didn't tax it much and we didn't encounter any performance issues with it. Having said this, in an LE system I can see it slowing your system down a bit if you were running a bunch of instances of it at once, but it's hard to say for sure since I've only used in on an HD system...

Published on 06/15/09
The Marshall Time Modulator plug-in is described as "a faithful recreation of a classic and much loved piece of audio hardware."