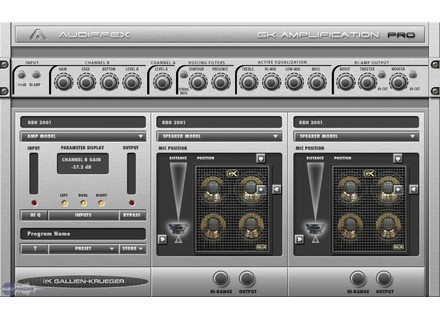 Audiffex GK Amplification Pro
5
Audiffex's GK Amplification Pro is a plug-in that was designed by both Audiffex and Gallien-Kruger, who is a fine maker of bass guitar amplifiers. The plug-in is available in both VST and RTAS versions. I wasn't involved with installing this software, as it was already bought and installed at the studio where I work before I started working there. As long as you have proper compatibility, you shouldn't encounter any issues with this software, as it has run smoothly for the time I've been using it. The make up of the plug-in isn't too difficult to understand, although there is certainly a whole lot that you can do with the plug-in. All of the bass amp emulations are modeled after Gallien Kruger gear, which does give it a life like feel. Within this plug-in, you've got control over the amp model and speaker model, as well as equalization and more traditional amplifier parameters. Everything is pretty self explanatory, but it definitely takes some time to dive deep into this plug-in. I haven't seen the manual, so I can't speak about it's make up.

We're running the Audiffex GK Amplification Pro on an Apple G5 Power PC desk top with dual 2.0 Ghz processors and 4.5 GB of RAM. We run it within Pro Tools HD, so within this system I'm definitely not experiencing any performance problems. I can't say how well it would run on an LE system or something comparable, but I've never had a problem running it on the previously mentioned system.

As far as virtual bass amplifier modeling goes, the Audiffex GK Amplification Pro is probably the best plug-in I've used. There aren't all that many of them out there, but I've also recently used IK Multimedia's Ampeg SVX plug-in, which is a similar type of thing. The sound of this plug-in is pretty awesome overall, but where this really makes its money is with the amount of control available. You've got all sorts of different GK amplifiers to choose from, which of course aren't going to sound exactly like their hardware counterparts, but still sound very good. If you've got a DI bass sound and want to bring some life to it, using this plug-in is the perfect way to do so during mixing. I'd definitely encourage you to get your amp sounds from the source whenever possible, but if you don't have a bass amp or are just looking for some more colors, this plug-in will definitely give you that. GK Amplification Pro is definitely worth trying the demo for anyone interested in bass guitar amplification virtual modeling.
Did you find this review helpful?yesno
»