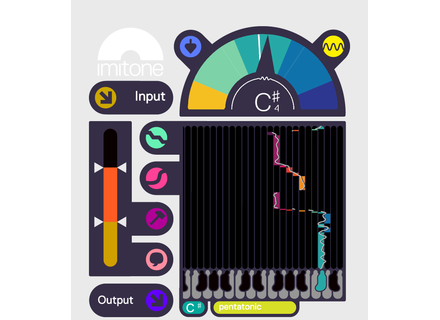 The A3E was to place to be this week, and we met there the Imitone team with their new software.

Imitone converts any audio signal received from a microphone into MIDI, wether it’s an instrument or a voice. The idea is for non-musicians and beginners to record to their computer the songs they have in mind.

The software for Mac and PC reproduces continuously and in real time the variations of the voice or instrument in MIDI data. It’s able to manage dynamics, vibrato, hums and any nuance in the source signal. Imitone uses for this a technique called Self-Attuning Resonator Cell that, unlike FFT, can “lock on” to a precise frequency and “ride” it through its spectral fluctuations. The algorithms works at the granular level, which allows for understanding and reproducing fast vibratos for instance.

As a MIDI controller, Imitone works with your virtual instruments or apps, although the final version should include a selection of instruments to help you get started. The GUI includes various controls to correct or automatically choose the scale, adjust volume, vibrato, pitch bend and you’ll also find a Percussion mode for beatboxing and an octave transpose feature.

Imitone is still in beta version but you can purchase it now ($25 for the standard version and $60 for the Prime edition) and access this beta phase. iOS and Android apps should also be available in 2015. Visit imitone.com for more info.

We met the Imitone team at A3E in Boston for a special presentation of the software: