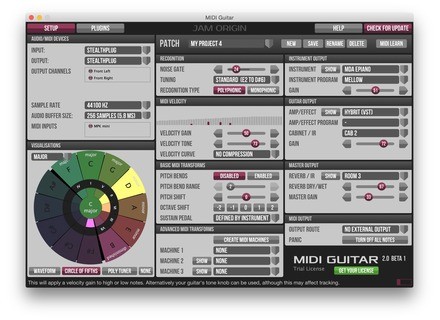 JamOrigin MIDI Guitar 2
5
This piece of software software allows realtime conversion of a guitar’s audio signal to MIDI.
Other versions also exist for use with electric bass and violin.
(though while it was designed for these specific uses, nothing prevents you from using it with vocals or other instruments)

The software’s prowess comes from several aspects:
- a very low latency : it’s as efficient as hardware systems (MIDI guitars, Roland GK sensors + hardware…). Beware though as the latency also depends on your audio interface, so set the buffer as low as possible.
- a very good chord detection, even when played quickly (think funk), which shows a prodigious algorithm.
- the same with single notes, even on quick phases (solos…)
- excellent expressiveness and detection (palm mute, hammering, pull off, legato, tapping, bend – you name it!). Of course, you’ll have to play rather cleanly and avoid buzzing strings and so on.
- allows routing the MIDI signal to your MIDI out interface to play on your favourite synths and samplers, or to your plugins (it’s not a closed system)
- very simple, complete, well done and affordable (under $100)

While it’s far from being labyrinthine, it’s still very comprehensive:
- the guitar’s tuning type can be set
- the noise gate threshold can be defined (which can be practical depending on your guitar and pickups – single coils, humbuckers – it is equipped with)
- you can also choose from polyphonic (chords) or monophonic (no chord)
- the resulting MIDI signal’s velocity and curve (highs/lows and compression rating) can be set
- the pitch ben can be activated or deactivated (normal/linear or half-step bends)
- and, of course, the MIDI signal can be transposed (per octave or half-step)

- it features a small synth part that can be set on or off (with a few sounds including piano, synth…)
- an FX and amp simulator section, which is aimed at transforming the guitar’s direct sound
- a mix part allowing to mix both with an FX buss (including chorus/delay/flanger) and a convolution reverb buss
Of course, presets can be created and saved.

If you’re a guitarist who also likes synths while being a better guitar player than keyboardist, this piece of software was made for you!

It shows how great a MIDI controller the guitar can be. The playing style, chord position, velocity, sustain and phrasing will of course differ from playing on a keyboard, hence your synths will react differently with surprising results!

Use it with MIDI sounds emulating pads, leads, wood or brass instruments, keyboards, pianos and so on, but also guitars, ethnic string instruments… and basses!
Play Hey Joe on a D50 and Hotel California on a Virus redefines the meaning of “pure ecstacy”!
More seriously, I play blues/jazz ala Roben Ford / Larry Carlton and playing small riffs and solos with synth sounds is very cool. The half-step based pitch bend feature is great!

So, give the demo a try!
Did you find this review helpful?yesno
»

Published on 10/22/15
JamOrigin's MIDI Guitar 2 Beta 9 is now available to customers, with current plans for a final release in the weeks to come.

A new beta for MIDI Guitar 2

Listen to the 5 audio files about JamOrigin MIDI Guitar 2 »