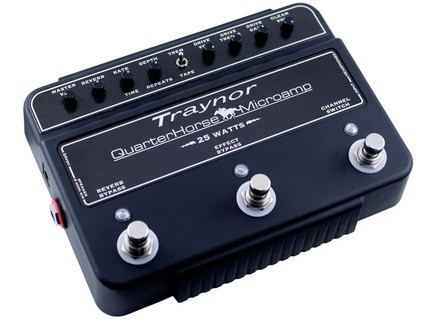 All user reviews for the Traynor Quarterhorse

Average Score:4.7( 4.7/5 based on 2 reviews )
Not satisfied with those reviews?
Our members also liked:

Traynor Quarterhorse
5
Amplifier transistor 25 W, an input and output into 8 ohms.
3 swiths the first to enable / disable the reverb, the second to activate
a sort of delay super nice, the third to go from light to drive up
the slight crunch to distortion Seventies (hard rock)
A gain knob for the drive, a volume knob for each channel
Simple and super efficient .... Warning this is not a toy as it is a
Wholesale 25 watts under the hood ... enough for rehearsals with a drummer
not too beefy and small coffee / concerts...si if ...

Configuration is very simple, very effective settings
for tone, only a treble knob is there but there
for moving a sound English to an American sound (left to right)
The sound of the transistor is to die for ... and I mean it ... rarely
had a transistor amp as well ... thank you ... TRAYNOR made in Canada ...

There is truth in the grain, with a les paul is fat and "rock-Ailleux"
with single coil Strat style slap increasing the treble.
reverb effects and enrich the whole. More than a Swiss army knife, this
mini amp that can be used as a pedal becomes a companion full
for use at home, while traveling, etc. ... it connects both on a once
twelve a 4 times 12, on the other hand in 8 ohms only.
All sounds are satisfactory, except for Metal course
but ask for a versatile small practice amp and if
its size and light weight. perfect for ballads, blues,
see the rock hard rock.

Acquired for a month, I do not get tired. I bring with me
holiday with a small 112 cab mounted Celestion V30, and honestly
no need to burden myself with pedals ... reverb and effects enough for me
ample.
Nothing like a Tech21 SansAmp 3 channels is only the preamp ...
its impersonal and dull ... where there is a real personality ... of course it
has no headphone output ... but play with headphones there's nothing worse for
fuck eardrums.
The value for money is to die, and if the bug is in
time is a purchase you can not miss ....

Traynor Quarterhorse
4
Complete since it is the goal: A clear 2 channels preamp / saturated 3 effects: Delay / reverb / tremolo but then very molo this one since I do not use
input input / output HP.

Relative size / weight / performance without concurrency.
Ultra common practice for guitarists and big fun when I go out
, Let me look style what is this toy and 10 minutes later auditoir
wants one.
I go to rehearsals a motorcycle in the cover / 2 jacks / the quarter horse and roll my chicken.
This is the thing you sold and night meme you say, but what took me
I trépanné or anything.