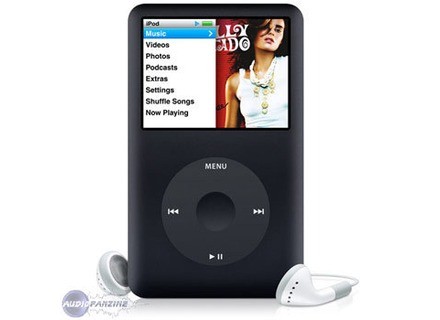 Apple iPod Classic 160 Go
4
The original iPod took the world by storm and helped push the MP3 distribution into an unstoppable monster. The device that helped start it all was the iPod, now renamed the iPod Classic. It has gone through tons of different reiterations, and this is probably the last one.

Ever since the third or fourth generation iPod, there has been the special scroll wheel. It feells great and responds nicely, but there has been some issues with it sometimes failing due to dirt getting inside of it after years and years of hard usage. The iPod Classic is known to be storage monster, and this is no exception. The 160 GB can hold more music than most people have. However, you have the issue of the hard drive failing since it’s still a standard disk hard drive. The newer devices on the market are faster and more shock/drop reliable since they’re all flash based.

You always have two camps -- you have the one that must have their entire storage synced, so they get a device like this. The others are smart enough to realize they don’t have to sync their entire library to their iPod every single time, so they get away with special playlists and selectivity when it comes to putting music on their device. In case you couldn’t tell by the way this was worded, I’m in the latter group. I have well over 200 GB of music, and if I were to sync the entire library, not only would it take forever over the USB 2.0 connection, but I’d also have to deal with scrolling through all of that every time I want to listen to music. It’s just not really practical.

If you’re looking for a new iPod, I recommend trying to get the iPod Touch or the iPhone if you need a phone as well. If you need the extra storage space, I recommend you just rethink the way you sync.

Apple iPod Classic 160 Go
5
I use this machine for months now. I'm not very skilled or educated on players of all kinds, but I went through the sony walkman, mp3 a basic that we all had in 249 mo ...
I still buy lots of records, because I have a hard to do without the physical medium is the cd! So I maousse quite a collection, amplified by the discs that we are ready and exchange between friends.
I said go with 160, I would have something to fill it without sorting for a while.

Mp3 compression involved music via computer leads to considerable loss from the cd or the more reason, vinyl. But the practical side prevails for many.

So to give you an idea of ​​the capacity of thing, so far, my itunes (and ipod affiliate) contains 710 albums, 25 days of non stop music and I still have at least 100 gigabytes more to complete.

I listen with my headphones while the marshall major. I'm really happy with the record, and I would do what (s) choice if they were redone.
Did you find this review helpful?yesno
»

Apple iPod Classic 160 Go
4
* For how long have you been using it?
I use it for a few days to replace my Archos 404 which has passed away.

* What thing do you like most/least about it?
I originally purchased primarily for its storage capacity fairly consistent. But I must say that sound level, the record is good but ultimately if they have a good headset support (I have the Sennheiser CX300). Otherwise it is a pity that there have not customizable equalizer and he'll have to settle the many available presets (rock, jazz ...) which are all different, but for some, high saturated volume. Exactly when the volume, it can go very high to my surprise. I fear that Apple are running the same law as Sony. Otherwise level use of the device itself, it is not very complicated, what it will take a little time to adjust to get used to the navigation wheel. Otherwise black spot on Itunes recess. It is not necessarily complicated software but very vicious. It will take patience and nerve to control this software (for example to put music, you have already the album is fully tagged to avoid mixing not possible in the library, then copy it to a folder " automatically add to iTunes "and not import it directly from the software because it does not work! That's what I think vicious!). The only advantage of iTunes is that when everything is sorted with covers and everything else (it took me 4 full days to 22go music and yet I have not imported all my cds, most were computer) is that it makes good on the ipod and class, that's all! Otherwise level contents of the box except for a headphone and a USB cable, there is nothing except a tiny manual 3-page leaflet in English. Apple on this side would have done better!

* Did you try many other models before getting this one?
I tried everything, the sound is not as good as Sony and Cowon's for sure, but even better to me than all other brands (Philips, Samsung, marks the first prize, Sandisk ...). I would say it lies at Creative.

* What is your opinion about the value for the price?
Having good enough storage capacity and battery life

* Knowing what you know now, would you make the same choice?
I do not know, having a tight budget does not take a Cowon but needing a thinner device for mobility, why not?
Did you find this review helpful?yesno
»