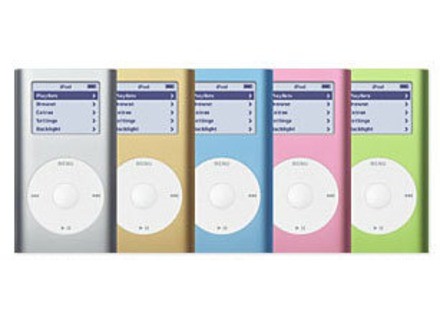 All user reviews for the Apple iPod mini

Average Score:2.4( 2.4/5 based on 5 reviews )
Not satisfied with those reviews?
Our members also liked:

Apple iPod mini
3
The Apple iPod Mini was a miniature version of the famous iPod that Apple released from 2004 to 2005. The device contained a standard scroll wheel found on the older iPods, had a monochrome screen and was available in either 4 GB or 6 GB versions.

The iPod Mini was never a device I liked. While it was smaller than the original iPod (now called the iPod Classic), it was never that much smaller. On top of that, you had a limited storage space. For someone like me who has hundreds of gigs of music, the small audio capacity was very limiting. The battery life on the device was only eight hours on the original one, but the newer one bumped it up to eighteen.

The device itself was marketed more towards people who were active with their lifestyle. If you were a runner or someone who does lots of exercising while listening to music, you were the target audience of the iPod Mini. It seemed to work nicely thanks to the smaller form factory and ability to not skip like crazy.

The headphones that come with this unit are pretty bad. They are cheaply made and sound pretty thin overall. Most people who got an iPod during this time (and even today) tend to replace them with higher quality headphones. The navigation of the unit remains unchanged from the fourth, fifth and sixth generation units, so there’s no issues when it comes to finding your music thanks to Apple’s extremely intuitive interface.

In the end, the device was short lived thanks to the introduction of the iPod Nano. In fact, the Nano is still made to this day. While the device wasn’t too bad at the time, it still had its flaws. Considering how much Apple has advanced during these six years, I wouldn’t even buy one used due to reliability issues.

Apple iPod mini
2
Bought there over 5 years, but now unencumbered.
I had a lot of models of low cost mp3 players before, but they all eventually give up the ghost, that's what prompted my purchase at the time, I thought the product would have an apple better life.

In terms of ergonomics, there is no problem we are facing a product of the Apple brand is plug n play music and once loaded, it quickly without navigating menus to find the song to hear .

The weight is at black level of autonomy, it is very good initially, but drops rapidly, so much so that after a year I had just enough battery power (load) to take 40 minutes. No way indeed to replace the battery yourself, so, I left the unit to oblivion ... Needless to say I have bought ipod since such failure is unacceptable for a device to 200 euros.
Did you find this review helpful?yesno

yoreck's review (This content has been automatically translated from French)

Apple iPod mini
1
I agree with the second opinion. I had two, the first and second version that had more autonomy and lach me after 3 years. The only plus: its look and usability but there are much better on the market.
Did you find this review helpful?yesno

The_Missing_Dude's review (This content has been automatically translated from French)

Apple iPod mini
1
Battery not reliable, but no known problems solved by Apple.
Dismantling consuming water as fragile.
Falls short in the bay every 6 months to comply with stringent guidelines on the battery.
Unacceptable from Apple for a device that cost 200 euros new.

Otherwise, apart from these problems écoeurent of the craft, listening to the sound is OK and cool features.
But 200 euros a disposable camera, daring!

Little follow-up, two Ipod in one year, both HS (drums, wheel ...)
Apple crisp detail, they do not repair, they change, which cut net guaranteed.
Visit the net and forums and more Audiofanzine you will see that it happens more often than we think.
I said, I am not a nag, I am very meticulous and careful. It's just that it's really not that good and that Apple knows what sickens me.
Did you find this review helpful?yesno

etiennemougeotte's review (This content has been automatically translated from French)

<p class="bbcode-cite"> Quote: <span>What is so special that you like most and least?</span>
dimensions, it holds well in hand, and it knows how to stay discreet. the hard drive size, reasonable and design of course!

<p class="bbcode-cite"> Quote: <span>Have you tried many other models before buying it?</span>
Ipod not had before, but a USB key and various Archaos MP3 which all finished in the trash ...

<p class="bbcode-cite"> Quote: <span>How would you rate the quality / price?</span>
for 220 euro at the time was an incredible luxury! but it's good to be snob.
<p class="bbcode-cite"> Quote: <span>With experience, you do again this choice? ...</span>
always an Ipod for sure. contrary to what I just read below, this machine is reliable, I am carrying around every day I recharge both on the computer, the industry, the livebox ect. So super reliable, robust design that could be better! So in 3 years, never had to complain! I am considering buying an iPod Shuffle, just for the design and summer, that's how I'm addicted!
Did you find this review helpful?yesno
Cookies help us improve performance, enhance user experience and deliver our services. By using our services, you agree to our use of cookies. Find out more.