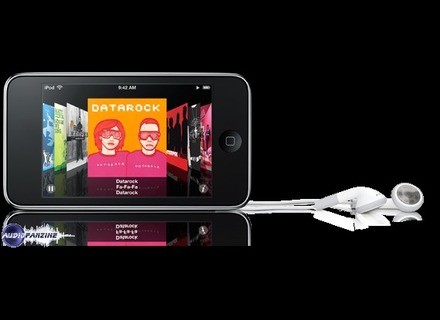 Apple iPod Touch 32 Go
4
The Ipod touch is one of the best music players you can get now adays. The 32gb version is the largest one you can get. Some casual music fans might not need 32 GB but back in the day 32GB was a normal size for music players. Apple has kind of herded people into using smaller capacity music players. The Zune I had before this was 32 GB and I thought that was normal sized. Even the Ipods that came before this you could get in like 60 and 80 GB. Compared to the Zune this has more features. . The Ipod touch has an external speaker which the Zune does not have. The interface of the Ipod is much more customizable than the Zune and this is even more so if you jailbreak your device. The Ipod has built in support for audio books as long as you get them from iTunes. The applications you can get on the Ipod make its usefulness next to unlimited. If you can think of it someone has made an application for it. On current devices you can run two applications at once but before when I had gotten mine you could not do this. You can do it if you jailbreak your device but it is very hard on battery life. One thing I wish the Ipod touch had is a volume jack on the top of the device. On the Zune the volume control is on the top of the device. I carry my mp3 player in the pocket of my pants so with the Ipod having the jack on the bottom of the device I have to keep the device upside down in my pocket. With the Zune I did not have to do this. The Ipod Touch is the best mp3 player you can get today. It is pretty much an Iphone without the phone part. One downside is the price. This Ipod is like 250 dollars. I only payed 200 for my Zune a few years earlier and it was the same size. You can get an iphone for nearly the price of this thing and its a phone too.
Did you find this review helpful?yesno
»

Apple iPod Touch 32 Go
4
The Apple iPod Touch is a phone-less version of the famous iPhone. It features most of the features the iPhone has, but the lack of a phone chip gives it extra room to throw in some more storage space. This is a device for those who already have a smart phone and don’t need the iPhone as it’ll just be a waste of money in the long run.

The iPod Touch is now on its fourth generation. It has gone through tons of different versions and upgrades, and the latest one seems to be the best of the best. This current generation features up to 64 GB of storage space, Apple’s special 326 ppi display, the A4 chip that’s inside of the iPhone running at 800 MHz, 802.11n wireless, the gyroscope, a microphone, a front camera and a rear camera.

The iPod Touch has all the great features that the iPhone has, minus the actual phone feature. To me, this makes the device much more enticing as the last few models felt a bit too gimped. The main thing people are going to be looking at would be getting either this + another phone or getting an iPhone. Keep in mind that the iPhone will cost you around 2 grand after the contract has ended.

To me, the iPod Touch is the model you should go with if you already have a phone and are looking for a device to hold your music. I prefer this over the regular iPod Classic as it’ more versatile and shock proof. The people who go gaga over the iPod Classic are simply those who don’t know how to properly manage their libraries. I have well over 200 GB, and I have no issues fitting the songs I want to listen to on my device. Sure, you won’t sync your entire library, but it’s not needed. It becomes overwhelming and unnecessary to bog it down with all that music.

bootsydan's review (This content has been automatically translated from French)

Apple iPod Touch 32 Go
4
It's been a year since I have an ipod touch, that is a perfect complement to iTunes which delivers a good sound overall.

I 'm essentially serve as a walkman, for it is that vraix regarding the wifi and all the applications Apple does it work ca nickel and not always does bugger (dirt application!)

I would do this choice, c expensive but you very well manages its library and itunestore has a huge catalog of music.
Did you find this review helpful?yesno
»