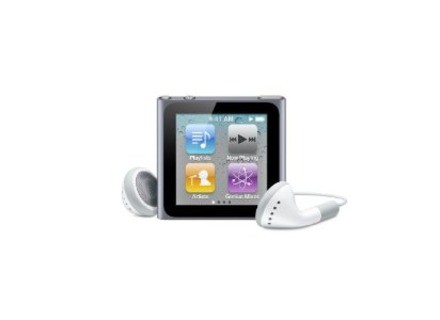 Apple iPod Nano 6th Generation
5
The new Apple iPod Nano (6th generation) looks and functions quite differently than the previous iPod Nano's, and many people were upset by it. Notably, it is much smaller, and the features have been scaled back (it cannot play video, for example). But I find the new size and shape to be revolutionary, unique, and very cool. I consider it to be like an iPod Shuffle more so than an iPod Nano. In fact, I bought this to replace my iPod Shuffle.

The new iPod Nano has two volume buttons, a master on/off button, a headphone port, and a dock port. All of the main controlling is done by the small square touch screen. My version features 8 gb of space. It also includes FM radio, fitness mode, and can view clock faces and podcasts.

Notably, one of the reasons I bought this was for the FM radio, and I wanted to use it as a cheap in-ear monitor system receiver. However, there is a 1/2 lag between the fm signal in real time, and when the audio comes through on the iPod Nano. Obviously, this is not a problem when listening to radio, but this latency is unacceptable for monitoring. I was a bit disappointed, and ultimately I used a cheap $10 sony walkman (with analog tuner) as my in ear monitor receiver.

Another cool feature is the clock faces, and if you buy a corresponding watchband, you can wear the nano just like a watch! I don't particularly use it for cosmetic or time-keeping reasons, but I do wear it this way when I work out.

The fitness mode is also pretty useful. It can keep track of your time, distance (with some calibration), and calories spent, during running or walking workouts. It did take some calibrating with half a dozen runs, in order to get the mileage working correctly, but I am amazing how well it does seem to work without the apparent aid of GPS.

Overall, this is a great little device that simply is not part of the Nano line. It is it's own beast, and if you need something like a iPod Shuffle but with a little more space and features, this is the iPod for you.