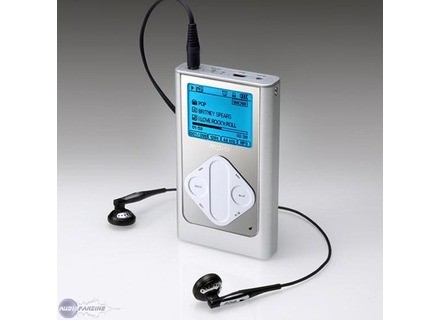 Shadar's review (This content has been automatically translated from French)

Mpio HD300
4
The MPIO HD300 MP3 Player is a very good quality, available in 20GB and 40GB versions. For my part I bought it at about € 360 April 14 20GB version. Previously I had bought two MD players from Sony ... What a disappointment when it came to pass through the interface of OpenMG Jukebox and lose time converting my MP3 "ATRAC" (more conversion on the latest models from Sony), while the HD300, it can act as a hard drive, so direct transfers! Interesting to replace the purchase of a USB key for example ...

Interface more attractive than the metal ipods "plastic" is more significant. Its screen is very nice blue hue in the menus and while playing music. It has the radio is one of the criteria that led me to buy it. It can also wake up and display the words (I saw the option but I do not know how)

It provides a really excellent! Despite the disappointing headphones supplied with the camera ... It has a sort of "equalizer" (very effective!) With predefined settings as can be found on winamp (or facsimile).
It can also serve as a voice recorder via built-in microphone rather sensitive. One can of course register via a supplied cable output stereo, radio etc ... A strange point: the audio is the audio output and record via the microphone, it is essential to disconnect the headphones ...

The design is nice, either. But that makes him a real soap ... For the price we do not really want to drop to the ground ... Better to leave it in the clip comes with the device can be seen here:.

You will also need to arm yourself with a minimum of patience when it will transfer the MP3 on the reader, not for the "transfer", ie send your mp3 on the hard drive 20/40Go ... MPIO but in fact requires the use of software, which will in fact create tons of playlists, all this in order to be able to browse your MP3s by artist / album / genre / title ... And if you do not, he will not see them!

I find the touchpad too sensitive sometimes and sometimes not enough ... But once you know the stuff (more on the support side of the button etc. ...) It is easily maneuverable. The touch buttons: button + menu button + enter = middle slider (volume or navigation)

When I bought my MPIO, I was told it was a South Korean brand ... I did not really hit at the time, mas present, I have sent several mails about my MPIO player ... and no response yet ... In addition to the VAS, if ever there is a problem on time may not be very short! While purchasing, I have not paid attention to the fact that MPIO is not and will not have remote control for the simple reason that the headphone jack is a simple audio jack. But it is true that for a player of this size that fits in your pocket you can easily change songs and adjust the volume via the interface control, the drive in your pocket. Although sometimes it has a "step behind." I hesitated between the HD300 and the Archos Gmini400 which had the consistency but no video equalizer and a large screen. The latter consume more than the HD300, it means less autonomy.

Despite the HD300 player is delivering high quality sound to match its price (for a purchase or a recovery of higher quality headphones). Its capacity 20GB/40GB hard drive makes the smallest of the moment with respect to its capacity.
Did you find this review helpful?yesno
»