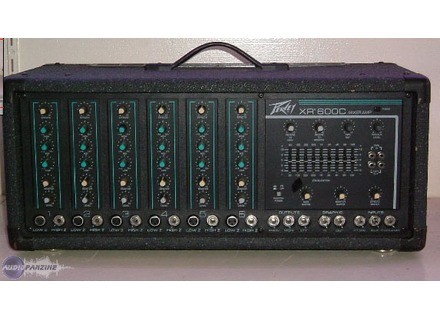 XR 600C, Powered Mixer from Peavey in the XR series.

Peavey XR 600C
4
The Peavey XR600C is a six channel mixer/amplifier for use with a PA system or something similar. I've used the XR600C a friends for band practices, although I don't own it myself. Each of the six channels has XLR and 1/4" inputs on the front and it also has 1/4" jacks for outputs, aux inputs, and the built in graphic EQ. Each channel has a three band EQ (bass, mid, treble), effect level (auxiliary), input level, and monitor level. The built in graphic EQ is made up of nine bands and is next to all of the leveling knobs for sends and returns and all that. It also has RCA tape inputs and outputs for recording. It's pretty standard as far as the make up is concerned as I wouldn't say that there's anything out of the ordinary on here. The mixer comes in the shape of an amplifier head with a handle for easy transportation. It's also got built in phantom power, which makes the unit a bit more versatile for possible studio use although I haven't used it for these purposes. I've only used this as a mixer for practicing with a band, mostly using microphones for vocals. The XR600C is a bit more versatile than this, but this is the other application that I've used it for. I don't know anything about when this was made or anything like that, as it was the kind of thing that I just happened to end up using and didn't seek out at all. I can't say that I would prefer using this over another similar amplifier mixer, but will say that this one certainly got the job done for our purposes and is definitley an okay buy if you're using it for this application and need something on the cheap...