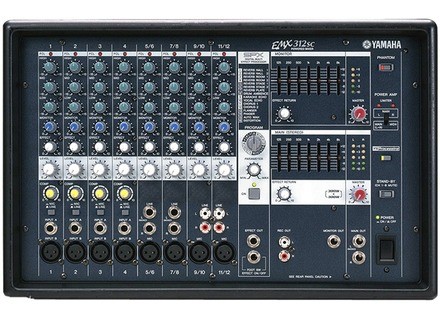 EMX312SC, Powered Mixer from Yamaha in the EMX series.

All user reviews for the Yamaha EMX312SC

Average Score:5.0( 5/5 based on 5 reviews )
Value For Money : Excellent
Not satisfied with those reviews?
Our members also liked:

Yamaha EMX312SC
5
The Yamaha EMX312SC is a dual 300 watt powered mixer. You will get a great sound with this mixer, I noticed the quality of the sound immediately the first time I used it. The compression on it is so easy to use, it is basically just one knob to use for compression and it will change the dynamics of your audio quickly. I really love what it does with bass; it gives the bass that punchy but still smooth sound that not a lot of mixer can do anymore.
There are some effects on the EMX312SC too, chorus, flanger, distortion and reverb are just a few of them but I think there are about 15 total. They all sound great and are very usable, and the effects will be able to be used on each channel.
This mixer is a great choice for a live show, there are a total of 12 inputs and 8 channels. This gave me just what we needed while we were using it. This mixer is not as portable as I thought it was going to be though. It was a lot heavier than what I expected it to be and if I had to use it a lot I think I would eventually want something lighter with the same specs. There are other mixers that have the same exact specs but are lighter. The knobs are made well and the LED meters are bright and easy to see in any kind of lighting. This is a professional mixer armed with phantom power and all of the bells and whistles you could ever need.
Overall this mixer is great for live events and I highly recommend it. All of the mixers in this line from Yamaha seem to be pretty good. They are all basically the same just more or less inputs on each one. Great control and compression!

papy dj's review (This content has been automatically translated from French)" Small but powerful!"

papy dj's review (This content has been automatically translated from French)" Small but tough!"

papy dj's review (This content has been automatically translated from French)" Small but tough!"

JOJOMIND's review (This content has been automatically translated from French)" This is the real foot!"

Yamaha EMX312SC
5
This is my first sound mixer, bought in 2009 by following the advice of the seller. I am super satisfied. This is a sound easy to carry and powerful enough to play in the rooms and even outdoors. I was really surprised by his power playing in the street. The volume barely above half and the whole street was sound system (not a small dead m ... no, a real 2 way street with very large lined sidewalks and houses only - so no possible return of his resonance).
Very easy to use: 8 inputs (jack or XLR sockets for microphones) in mono or 6 mono and 2 stereo settings (high, middle and low), volume effect (ten choices), compressor, micro switch / instrument, sound volume by volume of the inputs and general and the receiver equalizer (incorporated 2x300 watts RMS - real watts) front and by adjusting the sound volume and sound inputs and general equalizer Return (without amplifier - Add or returns assets scenes). So just the minimum for real settings without taking the head. Phantom power for microphones and some direct boxes or other devices that accept this type of food to avoid add their batteries.
At the rear, 2 outputs and 2 Speakon jack for connecting speakers facades.

The good side: Lightweight, compact, handy, small, stable, solid, it can be laid flat or inclined on a chair, a stool. Switches and settings buttons easily accessible and robust in use. Powerful, it exudes a beautiful sound.
Good finish. I've done 20 concerts with it (ie travel and sudden temperature change) and hundreds of rehearsals, she's great.
I plug directly above 3 mics (Shure SM58 and PG58 for voice and t.bone MB 75 for a Peavey amp), acoustic guitar (Yamaha APX 500 II via a DI Millenium DI-33), electric guitar (Ibanez roadstar 1987 series 2 and boss overdrive via a DI Millenium DI-33) and low (Cort C4H active via a DI Hartke VXL Bass Attack) and everything sounds super good. In half an hour the sound and all the gear is mounted to two. The drummer is doing alone because during this time we adjusting the sound. This is the real foot!

The bad side: It is a sound of "journey" so she is ready group and therefore the person who made the settings can not be close to the public. What makes adjustments during concerts rather difficult (it requires a person in the audience waved) and it is almost impossible to make adjustments during concerts because we can not "be in two places at once." This is in my opinion the only downside of this sound. Obviously I've never had another sound, so I can not compare.

A buy without hesitation when you do not have a big budget to buy a 2 kg watt sound system with 25 m cable and a sound engineer at his disposal.