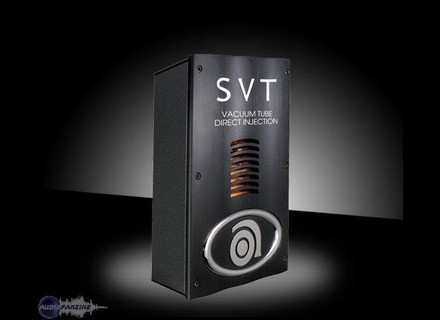 Ampeg SVT-DI
5
The Ampeg SVT-DI is a vacuum tube based direct injection box, designed for use in the studio. Like all DI boxes, it can of course be used in a live setting if you so choose, but as far as the SVT-DI goes I'd recommend only using it in the studio since it does have a vacuum tube inside of it, making it more fragile than your standard DI box. The SVT-DI has 1/4" connections for input and thru, and an XLR balanced output. It also has buttons for a pad, a ground lift, as well as for choosing between tube and direct.

There isn't all that much that you need to know about the way the Ampeg SVT-DI runs, as most of it is self explanatory and you will be able to pick it up as you go along. Even if you haven't got prior experience with direct input boxes, I think that you'll be able to figure out everything without much of a problem. Getting a good sound from it is as simple as sending something that sounds good to it, as it will take care of the rest!

As far as direct injection boxes go, the Ampeg SVT-DI probably has the fullest and warmest sound of any that I've used. While you can bypass the tubes and go direct, this isn't something that I do unless I'm looking for a specific type of tone. I've used the SVT-DI primarily for recording bass guitar, but it can be used for anything where you would want a thick DI sound. I think that you'd be hard pressed to find an application where this direct box didn't sound good...

While they no long manufacture the Ampeg SVT-DI, you can still find them pretty easily used if you're looking for one. There aren't too many other tube based DI boxes that I've used, and the SVT-DI would probably be the one that I'd recommend if you were looking for one. I don't know exactly what these would cost used, but since they weren't the cheapest DI boxes to begin with, I think you're still going to have to pay a bit more than average for this. All in all I would say that it is definitely worth it, as this is built like a brick and is a great sounding tube DI that will last a long time...

jorb34's review (This content has been automatically translated from French)

Ampeg SVT-DI
5
The socity Ampeg launches a box of direct light, to give some warmth to the sound of the instrument directly connect a console.

Team one 12AX7 tube, the direct box Ampeg SVT-DI is an instrument amplifier, offering to find the grain and often unique to the heat lamps.

The box is team of Jack and XLR outputs and an output jack to connect to thru amplifier on scne, while the signal is recorded on a console for example.

Setup is simple: the SVT DI is either used as a direct box (DI) classic or as a real prampli lamp. To do this, simply press a button!

Prampli function as switchable and can be a simple 'click' get a warm sound, typical of the 12AX7.

The case can also serve as DI classic, with, it should be noted, a rducteur volume between the-6dB as the output.

The manual is in English but sufficient (with schmas) for a 6 year old child do it alone ...

I play in a rock band or a 70's blues band, with bass as a diffrent JB US force, a Music Man, a PB or an old Hfner active 70 and each time the sound is perfect, especially since I play a Carvin 300W amp transistors.

The sound obtained by pressing the function pramp is really typical of his 'lights', a desire to crunch and the hours pass, the sound is warm and runny ...

By staying on the function DI, the sound of the bass is returned to neutral fawn, as with a conventional DI.

I use the SVT DI for 8 months, I bought this tool dpart to compensate for the pitiful hardware provided by sound engineers gnralement bassists (I laugh, not type ^ ^) and finally, I can not serve as the basis for a pramp his vintage best effect and possibly grate my volume output thanks to the push-6db.

Then I say more: it's beautiful, has rings, has an imposing, Ampeg's what! I will not change for anything else, and even if the price is slightly raised on the received and finishing more than srieuse (cast iron housing that remains cold for several hours of use APRS) justifies ample amount! In short all those who recommend the scne!

See all 7 photos of Ampeg SVT-DI »