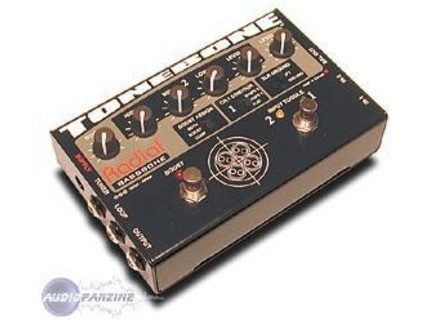 Radial Engineering Bassbone
5
History: I've played bass professionally for 44 years and a couple of my bands released 45s when that's what bands did, but none was a hit. I currently play in a praise band in a local church and also do studio work. I favor rock but have played just about every style, even -- shame -- disco. Favorite players include Paul McCartney, James Jamerson, Tony Levin, Chris Squire, Joe Osborn, Bob Glaub and Sting.

I first purchased the Radial Bassbone from Musiciansfriend in 2006 when my church band went with a 'silent stage,' requiring all electronic instruments to go straight to the board without amps. The Bassbone offered not only DI but great flexibility. MSRP: $350; Price paid :$260.

I sometimes switch between bass guitar and electric upright bass, and the Bassbone offers two channels with separate volumes and EQs, along with a DI, an effects loop/boost, tuner out, a ground lift and a line out to amp for stage monitoring. Channel 1 has a three-position Contour switch (flat or two preset EQs); Channel 2 has three standard boost-or-cut tone controls). Switching between the two channels is accomplished with a heavy-duty footswitch that activates green or orange LEDs to indicate channel.

The Boost section, also operated by footswitch with a red LED, can be assigned via a three-position slider to activate Boost, Loop (effects) or Both. A separate boost volume control allows you to set the level of the boost, all the way up to distortion if that's what you need (+12DB). The effects out jack uses a standard stereo Y cord for in/out signals. By using the footswitch to activate the chain, you to leave effects 'out of the loop' until you're ready to use them -- a handy thing if your effects drain the tone from your bass even when switched off.

Combining Boost with Effects allows you to pump up the volume for a solo or other feature. The Tuner Out jack allows you to keep a tuner plugged in at all times and send a signal tailored for tuners. The Output 1/4' jack sends a processed signal to your amp and a balanced XLR jack sends the same signal to the board. Even if you're not going to the board, the Bassbone can be used as a handy A/B switch if you use more than one bass.

There's very little not to like, but I had to replace the included 15VDC power supply after a year because the end that plugs into the unit developed a stress fracture and stopped working. Because the Bassbone can't be powered by batteries and a 15VDC power supply isn't something you can find in most music or electronics stores, I had to order a replacement adapter direct from Radial. Radial is located in Canada, and US customs held the package at the US border for three days for unknown reasons, so I had to go a week without the 'Bone. Since then, Musiciansfriend has started to carry the power supply ($19.95), so that's not a big problem any more. The new power supply cord has stress reduction at the point where it plugs into the pedal, so I assume this was a common problem. However, I'd suggest buying an additional power supply when you buy the Bassbone to avoid hassles.

The Bassbone is very well constructed of 14 gauge steel with a black baked enamel finish. Footswitches are heavy duty and rugged, and the knobs won't fall off. Bright LEDs make it easy to see what channel you're using and if Boost/Effects is in or out, even on a dark stage.

Separate channel volume controls allow you to easily match volume of different basses, and the three-band EQ on Channel 2 makes it ideal for tailoring the sound of passive basses when going direct. I run my active Lakland 55-94 through Channel 1 (set flat) and other passive basses, including my EUB, through Channel 2 because of its EQ.

The radial Bassbone is more than just a DI and is ideal for the working bassist who needs flexibility and options. Although some might think it pricey, it's no more so than some one-trick-pony effects units, and its quality and durability is superior to many stompboxes.

waylander666's review (This content has been automatically translated from French)

sorry it's in English

The Bassbone is a direct box "deluxe" for bass!
First of all what use?
the box has two switchable inputs assigned a specific two channels.
1st channel: channel bass active, it has a volume, and two pre-shape, which slightly change the sound (for a slap, and a more rounded and flexible)
the 2nd channel will be more suitable for a passive bass because it has a 3 band EQ low, mid, treble and the famous volume dedicated to the same channel. This system replaces a low active preamp for example.
But nothing is fixed with this case. one can easily connect a passive bass on the first channel to keep one side and vintange roots and connect an active bass for the 2nd even more colorful sound, or plug in that a low (first imperative at the canal!) and switch from one channel to another to get different sounds during a concert.
In addition to the Bassbone and with a boost with its level of output that can be assigned to the first channel, with two or lma exit "loop", the top hit for a little solo!

Plugged into a sound, the sound is very straight, very detailed, a great general definition, we can surely find one that suits her after a few adjustments. But beware this is not a tube so (personally) I find that the whole is a little cold, it lacks warmth and roundness.
Clean amp (Ashdown ABM 300 EVO II / cabinet Ampeg 8 * 10) again we feel a lack of heat, the attack is less incisive, sustain declining slightly. Nothing too obvious, either it could not sound but it feels a little less. Again, this is my personal opinion, with my own settings and my personal taste!

J'utile the Bassbone for quite some time one month, I tried mainly after repeated and live on a small sound system, and this product suits me very well. In addition I bought it in America at around 180 euros (250 dollars) so yes, I do it again this choice because it is an indispensable tool backpacker bassist who plays in different formations in different styles, with different instrumentstou in voyangeant light!
-You are doing a concert on a big stage without your amp, you plug this case appears by the returns you get your sound without having to carry your body 3!
-You record a demo for someone, you change your sound to the request without buzz, without repisse, and without the fuss.
-You make a concert in clubs, you can skip the fretless, electro-acoustic via an active / passive while grades good levels of sound and quality between each instrument!
If I put that it is only a 9 because of the sound a bit cold but it's very subjective!

Jack 2 inputs (Channel 1 or 2) Choice of 1 or 2 if one guitar plugged in or a choice of two basses.
1 output jack
1 XLR
1 input / output Effects loop (with a cable special one to predict) ultra-convenient
Output to a tuner
1 connection AC + 15v transformer supplied.
This is a relatively large pedal, heavy and super strong all-metal finish with a flawless from head to foot ... Nothing to say.

Only small "missing" the opportunity to put the batteries. AC air con like this, but in certain situations you can save battery life

Super simple! all "analog" and that manual in English but basic and comprehensive

You know how to use an amp = no difficulty.

Wow! I bought this preamp to record the bass via computer ...

Once plugged in and set ... the sound is well rounded, precise and dynamic to perfection. The bass is much more present. It really is a solid +, which I think can replace quantity effects "cheap" I do not like a bass ...

Well of course it is a transistor preamp ... but nothing prevents us from putting a preamp tube behind if you want to warm the sound of the bass ...

For 199 € is really a good bass sound ... without amp. I have not tested yet on stage (I'm no bassist) ... but it is certain that it will save a big move bass amp if you have a good sound system (and returns).

It's really an essential tool for anyone who wants to have a true cost of his deep and powerful bass ...

In the context that interests me - recording bass lines for my songs - the classic solution = amp + microphone easily have cost me € 500 with the major disadvantage of having to test miles microphone positions, avoiding feedback, repisse and noise and also to flood low my neighbor. Here everything goes directly through the table and we can play with headphones ...

Radial Engineering is truly "above the fray" ... I who have the habit of Boss pedals ... this one is a cut above ...

I aim now PZ-PRE equipment connected to my electro acoustic is unfortunately not the same price (369 €).

To conclude: the analog preamp is good in these times of "amp simulation" ... Both the case that the electronics inside are top quality and it means right away ...

Little advice to pass ... It is worth buying this kind of gear simple and efficient quality than buying the "foil" which supposedly gives 30 times more features for a ridiculously low price.

All that to say that just playing with the settings for bass and Bassbone was already a multitude of different sounds ...