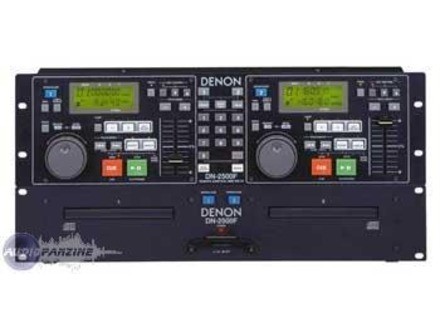 All user reviews for the Denon DJ DN-2500F

Freddie_Jones's review (This content has been automatically translated from French)

didjerfly's review (This content has been automatically translated from French)

Denon DJ DN-2500F
4
I possde this remarkable machine from 24/04/97, this era, there was no better: Instant boot master tempo, sampling 8 sec, loop perfect for the most important.
We understand why it still offers a lot of fun today and remains one references.
On 10/04/2002, I did replace the two laser heads, the player gave his right hand when playing rrrrchhhhh of 3 / 4 dernires beaches specially with cd-r, co t: 320.
On 10/10/2005, I still have this problem, j'achte a laser head and replaces it cot: 100.
This is a laser head Charp rpendue on most CD players.

Disassemble the bte a t easy, by extracting the carriage against cell Relva head of the Chinese case, put it back too, playing patience and precision, especially not to force, or remove the drive pinion, they are set.
The rglage potart the blue speed acts on the cd, I read for a PS2 Repair Tool.
In short, now she walks without any nickel rglages and still has a bright future ahead of it. She's really built to last exept the laser heads wear out, they can be read too many cd-r?

I had to change it, I would hang dn3500 2, sometimes I board hsit with Pioneer ...
I would stay and m'carte DENON pioneer of all that is "plastoc".
Did you find this review helpful?yesno

TomH's review (This content has been automatically translated from French)

Denon DJ DN-2500F
5
I bought a DN-2500F in 1997. In the era I was looking for the top in this format. Previously I had tried more products "LGERS" other brands, none of them allowed a boot IMMEDIATE.
So since 97, I still use it for a few nights, and every day to listen to music (I have no other deck)!
So I can say that reliability is at an appointment.
I encountered one problem on one of the readers: after 5 / 6 years, the player can no longer initiate some right CD, especially the bass, and other CD, There were crashes on Most recent internship tracks (the collection's outdoor those of the disc). I opened the machine for the first time, and I found the prsence potentiomtre a small rotary in front of the laser cell. By turning to pifomtre, I re-russi rgler defective drive working again now as the first day.
I regard the new reader prs DENON, I almost buy it, and finally I always use the DN-2500F gives me satisfaction Entire ...
It should be noted that its release did not t Designed for the serious CD. Most also did not pass (those green or blue, remember?). But the quality of materials with Volusion, the CDR today spend trs well as an original CD.
Did you find this review helpful?yesno

_Chris_'s review (This content has been automatically translated from French)

What I like most: irrprochable The operation of this player and its many functions

What I like least: The complexity to achieve certain functions

C'tait the best double CD was released (there are 5 or 6 years) and it is still aujoud'hui done everything that comes out correctly compared to competitors.

The report quality price is right, given the quality of the unit. (The new price era: 1200)