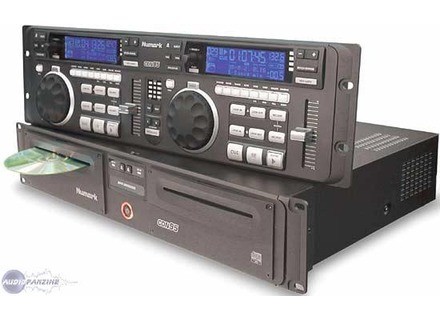 CDN95, Rackmount DJ Player from Numark in the CDN series.

l'elegant's review (This content has been automatically translated from French)

Numark CDN95
1
I use this camera for 9 months.
The characteristic I like most about this device is its design, but hey when you buy this kind of device it is not necessarily the main criterion of choice.
on the other hand, if you wanted to purchase this device for anything other than admire its esthéthique? Run away and go look elsewhere for your happiness is in any case, good advice, not you again "the high and dry" as I was and am again.
First failure "serious" (the right turntable was not working) after only six months.The unit returned for service under warranty had been returned after a period of almost two months environ.Seconde failure meme type as the first (except that there is outright two decks that do not work), only two months after the first retour.Donc again back to square one, and tjrs more platinum to that jour.Heureusement 'I still have an old plate replacement, much more reliable (although not too hard to beat) that this "junk".
A 1000 euros "gear" is frankly shocking, and yet I weigh my words.
The star that I only put on his presentation to the wise flatteuse.Point barre.a hello
Did you find this review helpful?yesno
»

LDVC@'s review (This content has been automatically translated from French)

Numark CDN95
2
I use occasionally for Numark CDN95 the plate since May 2006. (Mixing personal and rare events)

What I like most is the INTERLOCK (which synchronizes the music in the mix) and what I like least is the BUG's in the OS that drives the double platinum : bug that appears to mp3 tracks more than 14mn 33s 60Frames, bug I reported to Numark March 6, 2007 and is not resolved to date (June 20, 2007).

Two addresses to request an update of the OS for this double platinum € 950:
techsupport@numark.com
pshort@numark.com

Quality / price ratio?
When I see that we started selling new computers without screen to € 269 I find that a double-platinum € 950 which has a bug uncorrected seems very expensive.

I hope the bug will be fixed soon, and in this case the CDN95 ascend in my estimation ...

Ludovic.
(Talence)
Did you find this review helpful?yesno
»

benaudiotek's review (This content has been automatically translated from French)

I use this product for 7 months.
What I like least are the keys to control rubber causing a delay, certainly, but a little time, but this defect can increase the life of the tact switch compared to the Pioneer for example.

I tested many decks, DENON PIONEER TASCAM, I find this product interesting and easy to use with good effect (low blows).
Value for money mixed, the product mériteréit a slight decline.

Where to buy this product why not even if I plan to purchase an external hard disk controller such as the D2 I have tested and enjoyed.
Did you find this review helpful?yesno
»