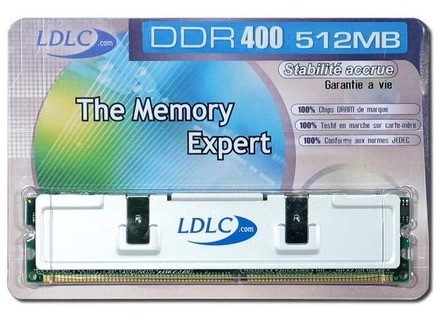 - What I like, period: the perfs trs correct (case 2.5) for what I do (music, games vidos), the rad dja Mount unlike many other bars in this range Price, the great stability and compatibility with motherboards and guarantee life!
I take the hsit Corsair Value of the same type but I t sduit the rad dja Mount it and the reviews on LDLC also logieux for the Corsair.

- I had dja other bars before: the CSD gnrique time my old AMD K6-2 500 that worked as it should through the DDR also gnrique 2700 on my Athlon 1700 + with a digression bad motherboard MSI chipset VIA buggi death (the chipset was the era a lot of compatibility problems with the ram among others) but this ram works well trs on another PC. And finally the non gnrique ram, the Corsair Value PC3200 cases trs trs 2.5 which worked well on the same motherboard, then the equivalent of LDLC ram Corsair that I 'I took for my new PC.

- The report is most excellent qualitprix over its competitors in the same price range, is finding the right time to buy because the price of the ram varies according normment PERIOD.

- With the exprience, I would do the same choices as I would not change the CPU ... aaahhhhh the dual core