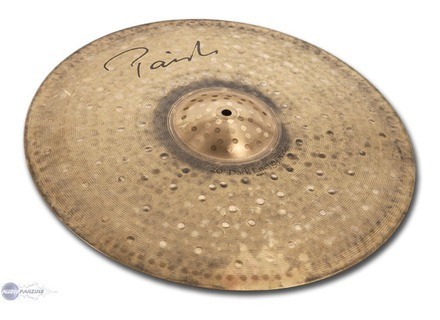 Paiste Signature Dark Energy Ride Mark I 21''
5
This ride is a marvel
Then hitting or less close to the bell we fear get a more ample or months, once we change strip the sound changes. (This can be unbelievable but it's true)
<ul>
with american hickory 5A promark, the sound is clear if we take the tip of the olive baguette and a little further if hit with all of the olive
with the number 6 Hickory agner (swiss baguette), the sound is slightly more accurate but offers greater power reserves
with Zildjan 5a, the sound is different, maple brings more sweetness and soft, pleasant music for any "soft"
with american hickory 5B promark, sound delivers power can even through the wall of the cymbal sound different without, however, it allows the guitarist to be pressed a basis for including solo.
vic firth american with jazz, she has a very precise sound with a volume control to volonter game
with mallets, one can obtain the equivalent sound a gong during a working power obtained is such that it is essential to protect the ears can take as long as you wish; it is always nice to hear, however, it will adapt its keystroke according to the style of music
with metal blades gives the sound a romantic caress.
</ul>
This cymbal can do absolutely everything from jazz to rock to funk, pop, marches, waltzes classical music accompaniments in harmony, support religious songs, progressive metal, mambo ... The power is controllable wish; Example: When just like to make a focus and we reasonably hits the next shot. It does not go live. This equals one point saw her to the front (focus).
From an aesthetic point of view, I was really surprised at the start I thought of being left in the rough does not react lighting and well I was wrong in a mid-dark atmosphere hammering performed at the hand reacts and becomes light while keeping his dark coat which makes sumptuous and unique both. (You have to love.)

the sound is quite dark and raw

The other saw practice (knock on wood) it has been five years since the regular use almost every day and I do not have a trace of olive also new in appearance than the first day.
After playing many a recovery with my chopsticks AGRER, vic firth, I realized that wand, fine enough to allow the front to have a good sharp and the rod is big sound is more serious. Acute sound is piercing but not garish (goes everywhere). For the bass sound (larger baguette) the bell is both accurate and singing. It nice to avoid the monotony of a rhythm. Moreover, its relatively large size is easier to aim, however for a regular sound, it is better to have a precise strike. In terms of price it's a different story to slightly less than 700 euros it is having an expandable wallet I tried also
<ul>
K Constantinople cymbals beautiful, the sound is as wonderful as the new signature, however, it has a slightly darker grain and less studied bell, it suffers in competition to the lack of size 21 "(but where these criteria are really a matter of taste)
At the Avedis Armand, I like a lot but is less versatile, in some context, it does not suit my taste.
</ul>

So in short, I advise for drummers who want a versatile cymbal upscale, with a specific sound not caring of the purse.
Did you find this review helpful?yesno
»