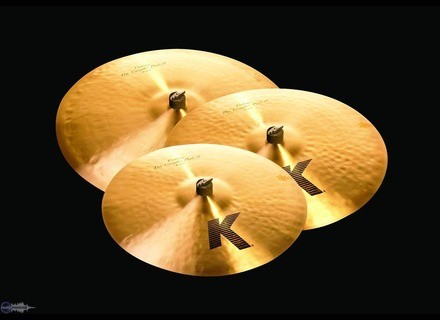 Zildjian K Custom Dry Complex Ride II 24"
3
This is a 24" ride cymbal, possibly the largest in the K Custom Series by Zildjian. This is a very interesting, albeit impractical, ride. It's tremendously deep. It has a misleading name, as I don't tend to think of it as being that dry. In fact, its very ringy, sort of clangy. I can say that it is unique, and that a few contexts might lend themselves well to this pedal. However, you have to be very minimal with it, considering how much it reverberates. I think that in a ride cymbal, most drummers I've recorded with, helped recorded, or recorded myself would say that its distracting and drowns out a lot of the sound of the band. My drummer prefers the smaller rides because they are brighter, crisper and more energetic than the 24". After he demonstrated the difference, I couldn't agree more. I would almost never use this over the 22" unless a drummer absolutely insisted. Its exceptionally well-crafted, as all cymbals in the K Custom line are, however it has little practical uses in the studio unless you need a deep, almost ominous ride sound. I think that even within the K Custom line there are far better alternatives, such as the similar 22" Dry Complex Ride, which actually sounds both drier and more complex than this.
Because of this, I think that anyone who can't afford to collect a lot of cymbals should probably skip this one for now. I think even for recording purposes, you'd be better off re-EQing a smaller ride than using this one if you need something really deep. If you do have the funds to make such a purchase, and feel as though you or your clientele could really benefit from a dark wet sound as this, maybe its worth it. I just know that I wouldn't recommend it to most people.
Did you find this review helpful?yesno
»