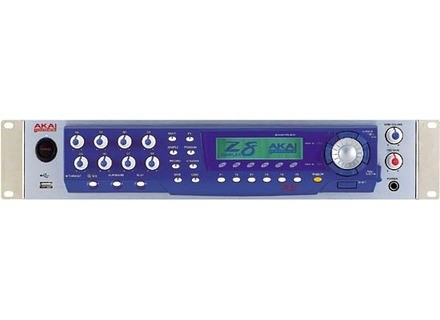 All user reviews for the Akai Professional Z8

Average Score:4.6( 4.6/5 based on 6 reviews )
Not satisfied with those reviews?
Our members also liked:

Akai Professional Z8
3
Feature are missing a automatical High Quality Pitch when you use 1 sample to map to the keyboard . When youPlay the Sample 12 notes higher than the original pitch , the sound quality is not as good as when you manually raise the pitch in the sample editor on the Z8 . This might be normal , but an option to use high quality Pitch should be available (creating new samples probably) . Another thing thats missing is : &quot;preview/EDIT Samples Direct From disk&quot; , you have a 40GB Harddisk but need to load all samples to memory first . . . could be changed without much hassle i think .

User Manual is not detailed enough , just to get you started . User interface is highly dependable on the AK.SYS Software , this makes it a lot easier t use , without the PC integration i would not have bought this .

Sound quality is OK , a little thin (but i was warned about that) , only i think the output level is no high enough when you want no distortion . The analogue outputs need at least -24 set in the output level to prevent distortion when playing multiple samples . (Digital out : -12db). Effect are simply NOT GOOD

Buttons are intended for HOME studio use , not even a big studio that has a lot of different people using the device.

I like it OK , i think it is more fun to use than a Software Sampler i used . I'm pretty happy with it .

Originally posted on FutureProducers.com
Posted by: Unknown ( 3-, 2004)
Did you find this review helpful?yesno

Aerodrink's review (This content has been automatically translated from French)

- The size of the RAM (512MB max, I think with such a vital BCAN and considering the price).
For someone who has long dclencher samples (on scne for example) or work in massively multi-timbral (32 MIDI channels on) is the IDAL. Then if one intends to use his sampler like an expander, you must know that even sound modules the latest issue n'embarquent not often such an amount in their poor little expander ROMs! For a 500 rating in BCAN that occasion, is worth looking beyond your disposal if you have samples of the CDs that go far - and there are plthore.

- Reading 24-bit (I think the only reach that figure with a real sampler architecture derrire)
- Hard drive visible from the PC via Ak.sys, wavs transfer in both directions directly from the mouse
- Maximum size of hard drive found: 137 Gb is not bad?
- Trs silent machine with a 2.5 "hard drive adapter and 3.5" -> 2.5 "is going well. It's a bit longer to load large multis, but you can hear the sampler
- Detachable faade a bit cheap but when even very practical, especially with an extension cord beeeeelle

- Effects. Really, Seith, I DSOL not to go in your direction, but the me who possde also an E-Mu E6400 Ultra and RFX-32 card in my case it's really the opposite view ... the effects of the Z8 is a bland, compared those of RFX (which is becoming increasingly rare, it must be admitted, and Christian in time, then). The rfx working 32-bit (against 24 on the Z8) and offers 12 bus with 6 slots for inserts in each bus! Compared to the poor effects of block 2 Z8 ... and quality is the day and night (effects algorithms in common with the Ensoniq DP-4 for those who know - yes, E-Mu / Ensoniq c'tait the box the same era; what a shame that Creative has ratchet E-Mu).

It is possible, consider a combo against the death using the output of ADAT Z8 (optional) enter a true multi purpose hardware type Eventide Eclipse (between ADAT ncessaire). Personally if I want real effects, I use the ADAT input of my E-Mu to route the sound to the Z8 rfx

Finally the comparison between the Z8 and the e6400, I find the engine synthse modulation matrices and more shoots on the e6400. As against the Z8 is a multitimbral monster and it is true that colors the sound less than the Emu. But what I love, me, the color of the E-Mu, even in 16 bits!

Finally, the Z8 is a good trs BCAN for lots of uses. In my case I use orchestral library as big as these sounds ncessitent little effect, and as multitimbral use, an orchestra, has held

In contrast, all my other sounds (especially pianos, electric pianos - rhodes, clavinet, wurlitzer, B3 etc. - and vintage synths alls are directly join the E-Mu and RFX-32, with which they are compared to the havoc Z8)

Finally, if you want to easily swing the wavs from your PC to the sampler, the Z8 is the most powerful sampler that allows this easily. With E-Mu is a bit more head-taking (unless you buy ZoeOs and spend some time on it).

hagaha's review (This content has been automatically translated from French)

Akai Professional Z8
Hi matos..j the experts amis..les really want to buy a real sampler I follow a few here and ailleurrs., Atire by Akai s6000 j and lately has tried a Z8.la issue this is after what diference between an Akai s6000 and Z8? of course there as the price e and more ergonomic and options. that would be your choice between the 2 machines currently Watchlist so should buy this type of engine aujourdui? Sincerely yours .and thank you for your advice. Hagaha

The edition of sound effects or is it easy?

- With the exprience, you do again this choice ...?
Did you find this review helpful?yesno

nofeeling's review (This content has been automatically translated from French)

Akai Professional Z8
5
One of the first (if not the first) large sampler using a modern computer connectivity (usb. ..), more polyphony, as necessary, converttisseurs both neutral and efficient, a large number of effects with a mega edition, an internal format wave, a perfect editing utility, only flat, low memory at the base, soon forced to boost the purchase.

The basic configuration is simple but very fundamental sense, the publication is both rich and instinctive for both the sampling, the dump for programs or effects. For anyone who knows a minimum the samplers, the manual is almost useless ...

It's Akai, so converting is pretty cool, but for me, aesthetics second to none. The sound of unparalleled cleanliness, and that tape ...
Filters (in bulk) and the effects are very effective and diversified range sounds.
Dynamics, the LFO, the resampling, time streech etc are immaculate.

I use this machine since its release, I know by heart and I still can not find any fault. The loudness and the infinite number of possible make a machine like no other. Of course, those who love the sounds hot or opt for Ensoniq emu, but those who prefer to remain in control of their textures will be interested. Of all makes and models I've tried, the Z8 is by far my favorite.
Appropriately priced for an exceptional machine which has a prominent place in any studio.

picolo's review (This content has been automatically translated from French)

Akai Professional Z8
5
CHARACTERISTICS allchantes.
By RAM count against high doses sories spares and internal hard drive, you can imagine the bill.
A little more polyphony would not hurt!

The use is not very easy, not that complicated but there are so many possibilities that you know what to touch even for programs with multi ya x x and each keygroup keygroup are still April 1 samples assigned four zones, with this 2 lfo keygroup by a filter. So a deal for keygroup 8 8 * 2 config paramtrables lfo free (well, not the summons) and 8 filters Different. Oh yes I forget the envelopes (ADSR or otherwise) for each course diffrent keygroup ...
In addition to the same can be said rglages several places like the pitch in the program, or in the multi zone, similar to the volume,
everything is sr leaves complete freedom to configure the machine as in our dreams, but we all know we must let our fantasies ds time where they are.
I stop No we will say that we are never happy, it's clear it's great but need to navigate and not get confused, otherwise it is total freedom.

Good management of the hard drive is really rotten, the OS is waiting I'm tired, you can do anything and it's long! it's her fault if I put 9.

Effect may! but you know now. And especially the outputs spares, it is essential to route them out hand.
Otherwise a ds will share time on a certain config rsonnance dsagrable filter, must be they call a cold ...

It is clear that this is an excellent sampler for hard against the effects shabby and the warmth of its external medium but can be arranged.
Despite its default, I Rasht z without my little problem, but j'espre that the bone will come soon I am impatient.

TuXi's review (This content has been automatically translated from French)

qq bugs remain in the bone and 1.45 JesperE a patch that is delayed

The question that comes Souvant c he's more than the Z4, the effects bin, the digital map (wordclok..)
stain the facade that I find really convenient and 8 pots facade also very practical

Tj handling not as obvious but c all, without reading the manual you can make you shit a long time to find the right option

sufficient but the manual could have put the example of creation because of its effect lfo routing cut and another envelope for me is not easy to use.

edition of the effect is simple but big c default the output volume effects, there's something wrong with the design of this part (well for me)

Ben must see what you put into it, otherwise c top. c not too made of metal, ca when ca pette Pette and must sleep qaund ca ca has to sleep (like us)

still improvements to be made on the bone

still slow loading sounds, they would face in sth like a rom flash ca
(Yes I know an expander)

value for taking, well I got this Z8HD a Euro 1290 but now the price has increased
but it is reasonable

from the soft c hard to say, the are very soft but with very good stuff behind if they are rotten.