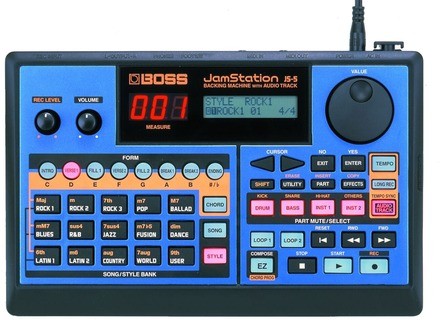 JS-5 JamStation, Sequencer from Boss in the JS series.

Jjuan25's review (This content has been automatically translated from French)

no it's not intuitive to 100%
this is not very complicated to function bases, but to use the EZ consists mode and create the styles of the manual is required

I have no opinion

can create song with this device,
a miniworkstation 3 stamps + Battery track

even if interest lies
especially in the expander

to listen to music create
only with device
https://soundcloud.com/daszed/js25


the resulting sound is not unsatisfactory

found the box for € 150 euro expander is difficult to argue less entry level.

The sequencer part is not transcendent but even if I have not emphasized EZ consists fashion, it seemed too daunting

jaimick's review (This content has been automatically translated from French)

- Styles
There are 200 preset styles and 20 user styles (that is to say that the user can make, possibly from a preset).
Each style has different reasons (Intro Verse1, fill1, Verse2, fill2, Break1, Break2, Ending) and 4 instruments (Drum, Bass, Inst1, Inst2).
These styles are already preset in Songs (or demo songs), each song is available in two variants (tone, ...). This allows already to train over (guitar, vocals).

- Effects
An effect can be applied to one of four instruments (reverb, echo, overdrive, compressor, distortion, flanger, chorus, ... there are plenty).
on the other hand, no effect can not be applied to the input (guitar, vocals, or online).

Finally, two pieces that use the same style may not look alike at all, if we vary many of these parameters.

- Memory
3.3 V SmartMedia 64 MB maximum (beyond the JS5 does not recognize the support).
Can be recorded in internal memory or card, a guitar, a song (or song-cons), or other instrument, whether as average, or high quality (HiFi), but it takes more space.
Since what is recorded is in a "sound" (not "midi"), the recording time is 32 minutes max on a 64 MB card

It is a small device that can easily take on holiday, to compose songs, or train.
We can also provide entertainment / services, since we have an orchestra on hand (drums, bass, and two instruments to choose from) that can connect to a PA system.
The usual functions are easily accessible (by hand or in some foot pedals via 2 [not included]).
Thus, in one piece, we can define two loops (and Loop1 Loop2), for example to improvise solos.
On the other hand, one can also enchainer pieces (having first preselected their numbers).
The manual is well done.

The sounds are quite good, but may lack the dynamics (including battery). Perhaps with a good sound system, it can be improved.
The Boss JS-5 ensures the support for different styles of music: rock, jazz, Latin, dance, blues, world, ...
And it is practical "live" because:
- It displays in large red LED numbers of the measure, which allows him to identify with respect to the words (if, of course, was careful to note the numbers of measurement on the words).
- You can enable or disable some of the four instruments, or some of the four instruments comprising the battery (Drum). This allows one to increase gradually as the course of the song.

This is a great device that I use for about four years, for "live" and studio compositions.
It allows you to quickly compose songs, without needing a PC or other keyboard. But it is necessary to complete certain instruments (the battery again for example), then you must copy the style used in a user style, and change the instruments or desired (eg from a keyboard).

To be perfect, it should be:
- In creating a user style, it allows to take the battery (or low, or Inst1 or Inst2) of another style
- In a song, it allows to change at certain points, the tempo.
- An effect can be applied to the input (guitar, vocals, or online)
- The memory card is not limited to 64 MB, but the ability of support
- It can play MIDI files.

And it is unfortunate that there is no Internet (site of the manufacturer, or site-user) other styles -> but it would be preferable to increase the limit (currently 20) of user styles.

Boss JS-5 JamStation
4
Everything has been specified in the notice before.

Usage is relatively simple, for against, as always, as there are a multitude of possibilities, it is still often put the nose in the manual, which is fortunately clear.

Only the instruments do not seem all very realistic, especially the guitars and brass, some wood. The organ and piano are well. But once placed in the mix, it is very correct. The pieces offered are varied and some are very nice and reminiscent of well-known pieces (House of the Rising Sun in particular).

Before this unit, I used a Boss DR3. But improvisation is quite limited in that there is no harmony. The advantage of JS5 is to provide two additional instruments, which will play the harmonies, which obviously makes the game more exciting really. I regret that he not play the points midday. I dream of a device that would read with a good one writes his scores on the computer. In the end, a device for improvement, but I could not find better ...

View the 9 files about the Boss JS-5 JamStation »