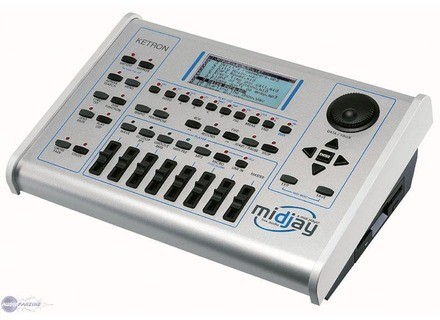 pearl-drums's review (This content has been automatically translated from French)

Ketron Midjay
5
Less than the SD1 sounds, for those who know. The purpose of MIDJAY is to minimize what is superfluous, but also being a user of the SD1, I'm not disappointed that they have removed the superfluous.
For style (orchestration) is the minimum but there are also, however, for me the rhythms that are essential and which are not, finally, we will not moan, we can make the patterns yourself, upload from SD1 or download. Everything is done very easily via the USB connection.
Outputs Left, Right and Micro, just enough.
CD entries very useful for me.
MIDI In & Out and Through.
No entry for a volume pedal against, contrary to previous models ...

Get started easily but then I usually being a user of the SD1 ..
Functions are easily accessible, fast enough.
I just wish that the function Crossfade (mixing) is not possible for the mp3 ...
I do not really read the manual because I do not think it necessary, at least for now.

For me the sounds are immaculate and realistic, nothing to say on that side, it's something I appreciate at Ketron.

I use it for a few weeks but I am very happy and I do not change your mind.
The value for money is good enough.

zeshad's review (This content has been automatically translated from French)

Ketron Midjay
5
Warning! the Midjay is not a sequencer, but a multi format player and arranger, MIDI expander in one. It's certainly a style karaoke player but for a musician.

Users sequences piano bar, caf or con Baloch, singer guitarist, singer, keyboard or duo? This unit is for you. I expected this machine for 15 years, it is a wonder, if so!
In fact, it's a little charlie lab but a pro version and improved.

That's what you can do with:
- Read his MIDI sequences on the internal sound card and / or go out on its external
expanders, can be repeated over a portion of the préindiquée loop pedals
and we can make listings of songs to chain without dead time
- Play mp3 or waves, the hard drive is 20 gigabytes: there is already enough to make
- Mix with a MIDI sequence wav (for example replace the track drums noon on a
wav track: the class!
- Improvise with loops waves like a synth arranger: Let me explain: you
sample several loops bass drum that you call Intro A, B, C etc. .. You
import USB Midjay in real time, you call on the pedal
scene: Fabulous!
- Drive a mini keyboard arranger to make internal midi sequences or
arrangements or make live improvisation. The sounds are those of the Solton MS not
revolutionary, but it sounds
- Create a list of sounds like sound effects, screams, explosions, and the Philharmonic Orchestra
call at any time of a sequence
- Connect your microphone, the effects are internal, and even add a voice card in
option to choirs crazy
- Scroll the texts of the sequences on a video screen outside
- A trip with just your guitar effect pedals GT, a microphone and Midjay
and you have everything to do the show yourself or you want (there is no sound though)

Negatives?
Some bugs when he balance too much multitasking and knobs a little unclear early in the race if it's the ball! So I put 10 still

In France, the MIDJAY is distributed by a merchant accordion so do not be surprised not too see it in stores. I have discovered in Switzerland, in a bar or a scratch metal played like sequences Satriani

Simple and intuitive
Many functions to be discovered then

1400 euros here seems expensive but not at all, I do it again this choice since it is the only one on the market.

See all 66 photos of Ketron Midjay »