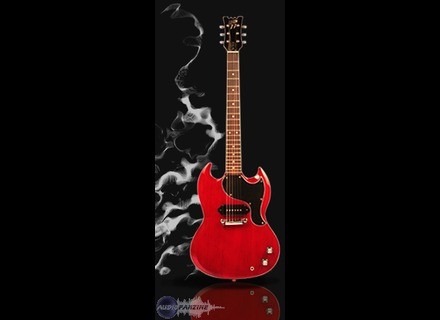 Cko74's review (This content has been automatically translated from French)

Custom77 China Girl Raw Power
5
A custom 77 SG junior version!
for specs go to www.custom77.com ( http://www.custom77.com )
I conduct the tests in a store on Orange Rocker 30.

SG form requires: Access to acute beautiful!
A handle style Gibson 60's, neither too late nor too large, the slides alone.
Where I was surprised that the weight of the beast, a real pen! We even like flying over the strings playing (well I abuse a little there but it's true that it is very surprising and pleasant)
2 knobs, more than enough for one microphone.

One begins to empty!
Sound is transmitted in all the wood, we feel it vibrate in the body! Besides the vacuum his fate very strong compared to my CS2 CG.
With Orange!
Then there's sends the dough! I was impressed by the potato micro Simple! it was really fishing!
Sounds from the Blues to the Hard Rock of the 60's until late 80's.
It can go to the metal, but I think there are better guitar for that.
I have not tried to clean, just a disto disto blues and more "couillu" (Hard-Rock event!).

I really enjoyed this skyscraper, also a voice in my head tell me to take a little sister to my CS2 ... maybe I would!
Unfortunately I never tried the original with Gibson to make you a comparison, but in any case, a really good guitar, good and very good violin sounds to € 315! What you ask for?

julien40's review (This content has been automatically translated from French)

Custom77 China Girl Raw Power
5
T say everything on this guitar:
- Made of core
- Body and mahogany neck
- Channel collbr /> - Bridge wraparound
- A micro P77 (P90 type)
- 1 volume and 1 tonalitbr />
The guitar has reinforcement at the head for fracture risk rduire here (gibson disease and I know what I mean).
The mcaniques drglent does not (it's a good point)

The handle has delivered silent trs convex with high action, and a small rglage round is played.
We do not talk to Access in acute but highway (all owners of SG not contradict me) and the weight is trsrduit (3.3 kg). The guitar tends nosedive (again like all the SG) but it's not a problem.

Regarding the sound, the spectrum is rich with a nice bump in mdiums, the P77 is not doing too badly (especially in crunch) but I blame him when even a lack of punch and an output level too low (compared with P90). I have a little problem remdier by Rausser 5mm but the level was still low. I have since been replaced by a Gibson P90 and frankly was doing much better!

I use this guitar for 9 months now and I am delighted the report qualitprix. There are some finishes that dtails let go but this is acceptable.
I had a concern of mine hung over but the customer service is so efficient that there is nothing to say. The head I do not really excited but also a fawn to dmarquer.
My choice does orient reading the reviews on several forums and I want to say to those who want a copy go their way. This guitar gives value for money, and that's all we asked (thank you Custom77). For me she serves as a second guitar and it does the job well trs.
If this choice I would do: Obviously!

pitch74's review (This content has been automatically translated from French)" unbeatable prices!"

The handle is a highway, thinnest flat and that a real sg junior (age 63) it is closer to the junior reissue.
To get a good sound, nothing more simple, one branch, and all is well!

8 of 10 for the 2 frets that curled at 15 and 17 on the mid aigue.Chose settled after careful planning.

The p90 has an incredible range of sounds, that were obtained just by playing with volume and tone, it can be very docile and very very wicked ..!

I have been using almost a year, departing purchased as a second guitar with my gibson les paul studio, she soon moved into my first game and my heart!

Being a fan of SG Junior 60 'but not the budget, I bought this guitar "for show", and in fact I love it!
She has undergone quite a modif ', namely:
-Grinder of Nut
Cts-knobs and condo orange drop
Seymour duncan p90-micro antiquity (which I recommend strongly, although p77 better than the original, even if it is not bad, and also much better than a gibson p90 now.)
Flip-badass with adjustment of intonation, which greatly increases the sustain of the guitar and a setting that allows the hair)
-Scheduling stick (which was not mandatory, but allows me to play with low action)
I allowed myself to as many mods on this guitar to 300 euros as the violin is very good. Thus mounted, it makes it that turn pale nimporte epiphone, and shames the SG faded on which J have played aupparavant.
Of course, no comparison with a standard form of the 80 or even a true junior (though the reissue model really is not terrible).

I would do that choice 200% dailleurs I board the Custom 77 to anyone who is moving towards a Gibson entry ... provided that the head of custom do not shrink too much, personally I find it very ugly! But plugged in before the judge too quickly, he may, like me, you change very quickly mind.

the +:
violin at the top
Good considering the price based customizable

the -:
The guitar was not very well resolved at reception

I hope my first review posted on this site will serve you, or consolidate in

your choice.
A value