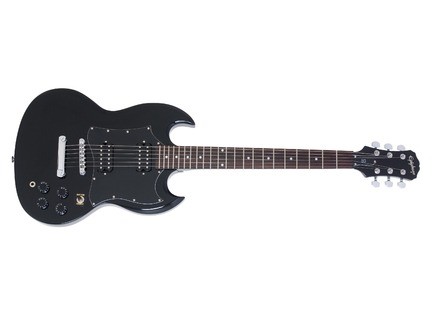 G-310, SG-Shaped Guitar from Epiphone in the SG series.

Epiphone G-310
3
I play an off-white Epiphone SG 310 electric guitar, I've been playing guitar seriously for almost a year now. Before that I played bass for 3 years. I am rhythm guitar in my band. I am a huge fan of classic 80's and 70's rock--Def Leppard, AC/DC, Van Halen, and all that. Also, Argentine Rock (El Rock de Argentina) is another favorite, bands include Ratones Paranoicos with a bit of Stones influence, and Soda Estereo, a pretty popular Argentinian band. I also love alt rock (counting crows, etc.)

I paid $250 for my SG, I bought it on Amazon I believe. I bought it because I had been playing an old acoustic for awhile, and since every other girl plays acoustic, I wanted to play electric--electric guitar has always been a lot more intruiging to me, and there is so much more one can do with it. I still love acoustic though.

I love how it looks, and the sustain is pretty good. The pickups are pretty nice but they could be better. This guitar has no real electrical difficulties aside from the plug-in spot always coming loose. However, once you screwdrive it in place, it should stay. It doesn't really affect its performance though.

I do not like the strings it came with (of course). Also, the sound of the guitar is not as 'full' as some. You really have to do a lot of comparisons between guitars to figure out what sound you like best. Compared to an old Gibson Les Paul I'm borrowing from someone, my guitar has a twangier, lighter sound that I don't like as much--it is not as full and quality sounding as the Les Paul.

It has good electronics, I've had it for about half a year and it hasn't done anything yet. The pickups are nice, they're kinda loose but they work really well and the rhythm/treble sounds are very distinctive and work well.

If you're a beginner, it's a great guitar, but if you want a better sound and quality, save up a little more.

Epiphone G-310
3
I bought this guitar many years ago (7 years?). I have no idea what I paid for it, I think it was $2xx.xx or something. I got it at Long and McQuade in Calgary.

What I like about this unit is the Epiphone build quality and the look. Playability is also good. It feels good to play.

I didn't really like the sound of this unit. The bridge pickup is way too far aay from the bridge if you ask me. It is not a very sharp (distortion) tone at all. Alternatively, the clean tone is very, uh, weird. Lots of bottom, and good high high end, but nothing in the middle really. In short, it has lots of noise but no tone.

The construction is excellent. Hardware is awesome. It intonated well and the action, once set, is good. Tuners are not top of the line, but are useable.

Well, it's pretty east to see that I like the build quality and playability of this guitar, but the sound always bugged me. I tried SOOOOOOO many things to try and get good tone out of this guitar; nothing worked. I finally just gave up and traded it for an SG special, which, ironically, is considered a step DOWN from the G310! The special is a far better guitar however.

Epiphone G-310
3
I baught my epiphone Sg off of musicians friend because i always wanted an SG and i couldnt argue with the incredibly cheap price of $200.

I like that it has a great finish on the body and sounds pretty decent compared to other models more expensive. I really like that it is extremely easy to fret making it easier to play the kind of music i like.

I really dont like how it goes out ot tune so easy and the pickups it comes with which is why im planning on putting an EMG 81 pickup in it.It also has this dull sound that doesnt seem normal which is why i hope purchasing new pickups will help.

The body and everything on the body is nice;including the finish and pick-gaurd but the pickups suck even if you do raise them to have a cleaner sound. The neck looks awful in the woods appearence along with the frets being ueven and please note that this doesnt effect the sound.

In general this guitar has a beautiful body and the fret board construction could use some work, but, if someone baught this guitar and purchased some high quality pickups, it could surprise you how great this guitar could sound and surpass anyones rating on it.

Epiphone G-310
4
I got this guitar for a starting to learn, and i read from other articles that this was one of the best for starting. I paid 200 dollars for the guitar but 280 in all for a package with an amp, stand, picks pretty much all the basics

The sound sounds great, The paint finish is flawless, its a bargain for 200 dollars.

I didn't like the cheap volume knobs, wished it was a little lighter, gets a little heavy after a while.I wish it had pearl inserts like the G 400 series, but what can you expect from a 200 dollar guitar?

The feel is great, The construction of the guitar makes it easy to play the higher notes, perfect for guitar solos. The quality is great, gibson definetly gave a good name for this company with great manuafacturing.

The guitar is definetly a get. If you happen to be starting to learn, this is your guitar. If not i recomment probably a fender strat. Even though the guitar is heavy, the sound is awesome and this guitar definetly exceeded my expectations.

This review was originally published on http://www.musicgearreview.com
Did you find this review helpful?yesno
»
Read the 21 user reviews on the Epiphone G-310 »