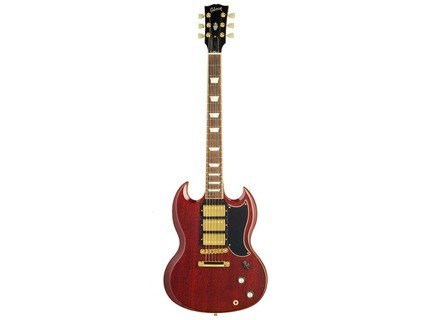 SG-3, SG-Shaped Guitar from Gibson in the SG series.

Gibson SG-3
5
n the early 60s Gibson was looking to lower production costs of the Les Paul. To do this they redesigned it to have a flat top and double cutaways. What we know now as the SG was introduced as the new Les Paul in 1961. The new Les Paul Custom was an SG shaped guitar with 3 pickups like the traditional Les Paul custom. Later on the real Les Paul was re-introduced and the new guitar was renamed the SG. This guitar is a more moderately priced version of the SG Custom with some better features. The guitar features the classic dual cutaway SG body with a 22 fret neck. It features three humbucking pickups selected with a chicken head switch and a master volume and master tone knob. The switching possibilities with this guitar is what makes it better than a normal SG Custom. Sporting a chicken-head knob, Gibson’s exclusive rotary selector offers six pickup settings: bridge, bridge/middle, middle, middle/neck, neck, and bridge/neck. With the old SG Custom you could only select one pickup at a time.

The SG was designed in such a way to give better fret access than the earlier Les Paul. The neck is not mounted as deep into the body as is with the Les Paul. This design gives it a few problems. The neck joint on SG models is very weak compared to Les Pauls or even bolt on guitars. This weak neck joint makes some SG's prone to going out of tune. Gibson has all but fixed this on current models. With the neck mounted so far out on the body and the body being so thin and light, SG's are prone to neck dive. When playing an SG standing up you may find yourself holding up the neck due to this awkward balance between the neck and the body. With the chicken head knob and only 2 normal knobs you may have to get use to different knob placement.

With the extra switching it is kind of like a strat. With their thinner flatter bodies SG's tend to have a tone slightly thinner than that of a Les Paul. Some people say it sounds more like a Gibson Flying V than a Les Paul. The smaller body also helps make the tone different than that of a Les Paul. Gibson pickups are mainly designed for classic rock. These pickups tend to offer a medium output. The classic 57 pickups are a bit bright but it fits with the guitars intended use. With the bridge position you get all the bite you are use to. With the bridge and middle pickups you get the bite with a little extra something from the middle pickup. The middle pickup and the neck pickup is a very popular position on strats and you can kind of emulate it now with this SG, and everyone knows what the neck position sounds like.

If you have been wanting an SG Custom but it was too expensive this guitar is perfect for you. Not only do you get the classy look of an SG with 3 pickups. You also get better switching capabilities than an SG Custom with the chicken head knob that the SG-3 comes with. They did not make many of these guitars so you will probably not see another so dont pass up your chance to pick one up.

John Michael's review (This content has been automatically translated from French)

Handle is a little thick, which helps to sustain, comfortable
Access to acute very easy as all SG
The weight of 3 microphones well counteracts that of the handle. It does not sting the nose.
Excellent ergonomics ideal weight (neither too much nor too little)
Having this impressive both the battery and some dsuette 3 microphones, plaqus or surplus (that is also what makes its charm) can limit the game mdiator, or at If the feelings of the right hand. However, we made it fast.

The sound? Both typ SG (Gras and just slamming) and very original thanks to the contribution of the middle pickup out of phase (as on the Strats). Many consistency in all combinations, but also a lot of precision and clarity. The single coil is good PAF humbucker clear and powerful, the intermediaries positions, that is totally original, like a Strat that would be super boosts, both clear and thick. Cel actually a hand model, very versatile, with sonorits not found on other models.
It opens new possibilities vritablement.

This guitar (bought by chance on the internet a person for whom it was redundant) is really original, without falling into the excesses too unusual sonorits. There is always the consistency of sustain, the precision, an aesthetic. It is an instrument both very classic and broadens the possibilities of the usual field. To have had two former DJ, (one that I regret eternally) I will not replong for standard microphones SG 2 new generation, and the models very loud- -end which I do not deny the qualities priori, are not my door. In the current context of supply Gibson SG3 this pageantry as a bargain for enthusiasts of beautiful sonorits, looking for a very well made instrument without being provided obligs sell "the farm and the horses."
Did you find this review helpful?yesno
»