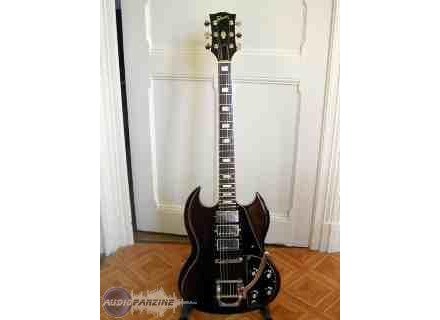 jah.mich's review (This content has been automatically translated from French)" Vibrola into agreement"

I also have an SG Deluxe 1971 equipped with a type Bigsby vibrato stamped Gibson.
I love this guitar as you describe so well has a look and sound of hell without mentioning its playability "easy" ...
My only concern is that when I use the vibrato it takes no longer agree, and I am obliged to practice pressure on the vibrato but in reverse to recover the initial tuning.
Then suddenly I do not use too much vibrato and it annoys me a bit (excuse me the term).
I'd like to ask your opinion if possible, or possibly that of your friend luthier.
Thank you in advance for your possible answer.

sgmikel's review (This content has been automatically translated from French)

Gibson SG Deluxe 3 Vibrola (1971)
5
I have the scratch for 3 years, I had another sg before and then I cracked on her look, so I sold the old one and bought it, it comes from us and gives him a look Bigsby Hell is an original Bigsby Gibson, she is much prettier than the picture on the site ....... also the peculiarity of the skyscraper, its handle, it is extremely thin, thinner than Fender handles and even thinner than the sleeves lp or sg custom .......... which makes it very easy to play ...... if I had to describe it I would say that it is feline .......... the wiring of the pickups is the same as a custom sg ........ I think basically we just all run separate or together ....... . personally I use it as an sg classic and I used some of the central micro .......... ....... matter of taste if not, it would well agree.

As I said before the handle is very easy to play, according to a luthier friend is carved in a typical tropical mahogany guitars of old is now forbidden to cut the veins of the wood are very beautiful and the guitar is super light, far more than the current sg which are yet not heavy! It is ideal for those seeking to exercise caution while keeping your back strength and sustain ...... the sound is exellent on all the microphones, but unlike some sg it is very round and very warm in the microwave serious when to him, the microphone has a good sharp potato without nasal, allowing a range of sounds interesting ........ scratch that sounds very vintage with a lot of grain, personality and a very hot .. ..... I was talking about the clear sound!! for saturations read on .............

Well, I played on a jcm 900 dual reverb head 100 watts. I play in groups and our stytle slap on influences as varied cure, joy division, nirvana, placebo, Sonic Youth .............. I use a lot with this sg metal distortion because there it is really terrible, grainy, compact, precise, incisive while keeping a big sound gibson. A real treat, its exactly the same as placebo sg ....... all the notes come out perfectly and all cash effects (the delay is running perfectly). with the distortion of the amp, it sounds more or acdc classic rock, but with a lot of grain and heat ......... since I scratch this, I tried other recent gibson and then there !!!!! you can not part with a vintage scratch!! unless you buy another skyscraper vintage! I paid 1700 euros, just be a bit pricey but good .....