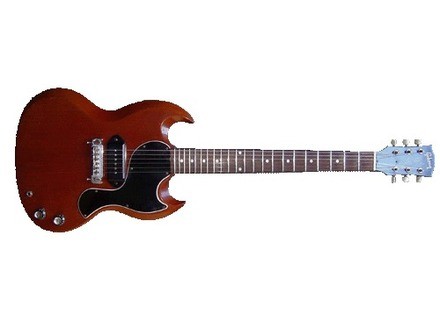 SG Junior, SG-Shaped Guitar from Gibson in the SG series.

fuzzstone's review (This content has been automatically translated from French)"a good junior."

Gibson SG Junior
5
Made in the United States, controlled by G. Waller in October 2011, came to me by Father Christmas December 24, 2011.
Junior is a "customized" series I would say, with the side roots, a Wraparound unopposed as the first model 61, a P90, body and mahogany neck. The body has a priori in the same room as closely, I failed to see any demarcation, although it surprises me a little, and stick into three parts.
for the next mod, mechanics KLUSON TonePros we meet the special and others, and volume and tone set as a junior LP and not down like the traditional SG junior.
for the next debate, a touch of maple roasted visually that does not change much compared to a rosewood fingerboard (to compare, I superimposed the handle of the small SG with that of my exploration, the photo is on the forum " ...."), fan of SG but sonorant speaking, provides a brighter side to the sound.
for the next luxury, a nice 5-ply pickguard and polished nitro classic upscale versions.
mine is the model heritage cherry.

The guitar is light, less than three pounds, adjustments body / neck are tip-top, the alignment of the strings on the pads of the microphone is nickel.

as I am a little curious, I opened the beast was done to see how the wiring. To be honest, the cable used, except cable P90 is rather cheap, the capacity idem, I&#39;ll have to change it when I had a moment ...

Delivered in a Gigbag the heart that hurts so much it protects nothing, but hey, I tape a little, I have an old box to the beautiful which is much better.

I put very good characteristics taking into account the perceived value / price. Of course, this is not a real vintage Junior 61 (just the location of the knobs to make the purists scream, lol) or a custom shop wood selected and made by hand, but it is a skyscraper with zero defects visible and if I believe the various echoes of late, it seems rather rare Gibson right now.
In any case to compare with the various SG I could owned in the past (it&#39;s still my 4th Sg, not to mention an old epiphone and Japanese ...) it has nothing to be ashamed, because even a little better than my ex Special Faded. Between SG1 and my old standard, I would say. (Except that the latter two were sold with flight case THEM!)

The handle is a 60&#39;s slim profile type, therefore, very comfortable, the frets are well adjusted, not one gene, no grip when passing a little quick access to acute nickel (it&#39;s a SG anyway).
short, a true happiness.
The light weight combined with a fairly successful ergonomics make this guitar, the ideal time to play without pain.
for me the SG is a real success in terms of ergonomics and comfort, almost Gibson&#39;s success in this matter.
a large excellent for this position.

I am short.
Yes, it sounds good as a junior.
A scraper basic, well damn, that sends the fat with his hyper-expressive P90.

the difference with previous models, is indeed an increased brightness of the sound, certainly had a maple key.

Otherwise, it growls like the fact only a junior, loves power chord, three notes on the solos with bends everywhere (oh yes, it fits perfectly in tune, I forgot to mention), the bluesy riffs very chubby the rocks dollsien as hell, etc, etc ...

In clean, it does the job, nothing to say, but it is not my favorite sounds.
and then, I did not choose to do so.

For now I have played on my Fender Champ 600 coupled with my Ibanez UE300. (Config rock at home ...). config not a super modern, it must be admitted.
Mode "BIG CRUNCH" inside.

a test with my plexitone confirmed that she supported me very well distos longer supported.
Say, for all that is in core (hard, grind, death, etc. ..) is not the perfect scratch (same look, it&#39;s not the style), but otherwise, it does.

I note very good, because it sounds like I&#39;m waiting for a sound junior.
And I think when I change the wiring and it will have aged a little, it will be better.

I use it for a week then, almost more than she, but that&#39;s normal, it has the attraction of novelty.
I had a lot of Sg so in the past and even more different guitars. is not the Holy Grail or a guitar exception, but it sounds great, with a grain recognizable.
To put it sounds to my taste, better than my ex faded special, better than my former junior epi 57 which sounded very well also with his P90 gibs, and most importantly, much better than the three LP Junior faded I tried mag recently (and yet I wanted one from that one, but did not fall on the right apparently ...)
So I think it&#39;s a real good guitar.
Like all the juniors, it&#39;s not a very versatile model, but when you crack a junior, we care about this versatility.
In any case, "i can see for miles" on it, it does terribly.