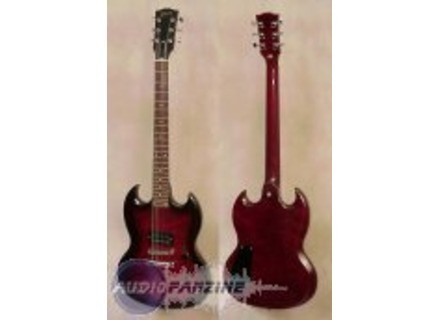 Gibson All American SG I

All American SG I, SG-Shaped Guitar from Gibson in the SG series.

Gibson All American SG I
4
The Gibson SG All-American was a limited run SG guitar. The only maybe for short time and they weren't very popular either. The only featured one humbucker pickup like you would see on a Charvel guitar from the 80s. You also add a burst of paint job which was unusual for an S cheek guitar. Most of the Gibson SG guitars were a solid colored where is the Gibson Les Paul's usually had some sort of burst going on on the paint job. To those two deciding factors limited this guitars appeal and popularity to the masses.

This guitar is pretty easy to dial and since it only has one pick up in it. So you have your volume control and your tone control and your tuners and that's pretty much about it. It is a simple guitar and sometimes these guitars came in different colors and also a walnut color which was a little brownish compared to the red or the first color. It's an easy guitar is simple guitar and if your particular to the Gibson SG and you might like this guitar.

The tone of it is pretty much the same as any other Gibson sg. Aside from missing the extra humbucker the normal bridge humbucker is still creating the guitar sound just as normal. The tone of it is pretty standard and you can't really verge away from the sound of SG. It still has mahogany body wood and neck wood as well as a rosewood fretboard. So the body with your still intact it's just been missing humbucker in the goofy looking burst on this guitar. This guitar sounds well just like any other Gibson SG with a high gain amplifier setting. So pair this guitar up with hey Marshall amplifier or any other high gain amplifier and you'll get a great hard rock town. This is a hard rockers guitar and a clean amp won't really do this guitar justice. The tone for this guitar will get better clean in my opinion than a Gibson Les Paul but then again you're probably not a play too much clean stuff if you think this guitar to begin with.


I have seen these guitars go used on the market right around $400 or so. That's not a lot of money for this guitar and they are kind of hard to find if you do find one then I would try it out first and see if you like the feel of it. It is pretty much the same feel as any other SG and the town is pretty much all intact as well. I would only recommend this guitar for someone who's SG fanatic and likes the variations of the guitars but for someone who is a stickler to how an SG originally looked and this is it going to be a guitar for you.
Did you find this review helpful?yesno
»

guitareur64's review (This content has been automatically translated from French)

Gibson All American SG I
5
RARE guitar, found in France it is manufactured in the United States, it has 24 frets, pickups gibson 500T here are the only features that can be found on the net

The handle is a highway, access to acute and very easy, it's a light guitar you can get any sound from the metal RCOK

I mainly playing metal so it suits me perfectly

I playing it for 8 months, I buy about 800 euros in the U.S. Used in France since it is impossible to find there were two models: the all american 1 and 2.

Gibson All American SG I images

See all 69 photos of Gibson All American SG I »