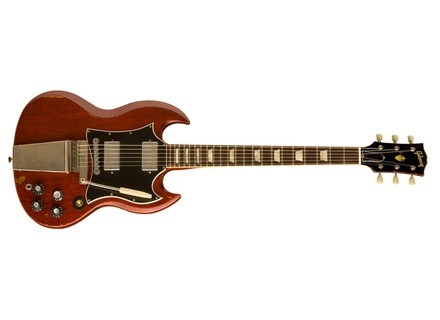 Gibson Robby Krieger SG
5
Gibson guitars is one of those companies that is just as iconic as many of the famous artists who have played them. When you think about bands like Led Zeppelin, AC/DC, The Who, The Doors, and thousands more you can't help but equate the style and look of a Gibson guitar when you see those bands or hear them on the radio. These guitars have revolutionized rock an roll. They took what Fender build and compounded upon it to create a much better and more practical machine for the new age of distortion and overdrive guitars tones. To get the overdriven guitar tones of the 60's and 70's you could not achieve that with a Fender guitar and their classic single coil pickups.You much fort play it with humbuckers and then you need a heavier thicker body and preferably used mahogany wood as your base body wood.

This is a guitar to pay tribute to one of the classic LA rocker guitarists from the 60's. He was the man behind the organ, but helped as who could. The man helped to forge a great sound for the band The Doors. He is not as iconic as the lead singer or the organists but he had a fundamental role in the shape of their sound back in the day.

This is an aged guitar so the look of it is worn in and beat. Not beat too badly but certainly looks used. This is a come thing now a days with new guitars to have a pre worn in look and feel to give the appearance that you are good well you really aren't. Or that you have been playing for years when its been maybe a couple. Either way some of the custom shops do a great job getting a better worn in feel to the neck which is very helpful and I would take that any day if I buy a new guitar. I first feel the neck and if it doesn't match up I don't even strum the thing. Then I strum it acoustically to see how it resonates. If that fails then I don't plug it in. Next I plug it in and see how the thing sounds as a clean guitar and then I move to the distortion side. Their are a few riffs that I play that fits my style that I try testing out guitars and amps.

This is nice easy road worn custom shop guitar. It has nice feel to it that is unmistakeably Gibson. The pickups are not great as I really have never cared for Gibson pickups. So I think those should be replaced as any Fender pickups need to be replaced as well. If you are fan of The Doors or of Robby then this is guitar for you. If not then this is a big pass.

At new these guitars come in right at around $5800. Holy crap that is load of money for a guitar. Unless you are a superfan of Robby or the Doors then I still would not recommend buying a guitar for this much money. This is just stupid. Don't waste your time
Did you find this review helpful?yesno
»

Gibson Robby Krieger SG
5
This SG is a special edition to commemorate the Doors guitar player Rob Krieger who has played SG guitars pretty much his entire career. This SG is designed to be like a typical SG from the 60s when the SG replaced the Les Paul and it was the new Les Paul. Gibson was looking to lower the production costs of making their guitars so they simplified the design a little bit. To do this they redesigned it to have a flat top and double cutaways. They got rid of the maple top so the body is just mahogany. This guitar has a 60s profile neck so it is nice and thin and fast. To compete with the Stratocaster many 60s SG's came with a Vibrola tremolo system. These tremolos were not very good and most people do not use them. It has dual Gibson 57 classic pickups. Each pickup has its own volume and tone control and are switched with a 3 way switch. The knobs are late 60s knobs that Gibson doesnt use much anymore. It has 22 frets on a rosewood fretboard with trapezoid inlays. The headstock has 6 Gibson Kluson tuners. This guitar is a blend of features from Robs favorite personal guitars. It has a light relic finish that looks like one of Robbys guitars. The relic job on this guitar is not over the top and some people may not even notice it. It is a proper finish.

The neck profile on this SG is unique. Gibson says its a combination of a late 60s and an early 60s profile. The early 60s SG necks were super thin and gradually they got thicker as time went on and Gibson started bringing back the Les Pauls. Because of the classic SG shape overall playability is great. The SG was designed in such a way to give better fret access than the earlier Les Paul. The neck is not mounted as deep into the body as is with the Les Paul. The neck joint on SG models is very weak compared to Les Pauls or even bolt on guitars. This weak neck joint makes some SG's prone to going out of tune. With the neck mounted so far out on the body and the body being so thin and light, SG's are prone to neck dive. When playing an SG standing up you may find yourself holding up the neck due to this awkward balance between the neck and the body. On this model this is helped a bit by the weight of the Vibrola tremolo system. The Vibrola is a pretty bad design and is just there for looks pretty much. It is pretty flimsy and if you try and use it like a floyd it will go out of tune at the very least or even break.

This guitar has the classic SG tone. The tone of an SG is a bit brighter than that of a Les Paul due to the thinner body. The Classic 57 pickups are modern day imitation of the classic PAF pickup that Gibson made famous. With the Classic 57 PAF style pickups this guitar is a blues and rock machine. The 57's have just the right amount of sag in the tone so you can really work the dynamics like you would with a set of real vintage pickups. The neck pickup is super smooth and when you throw in some tone knob you can get that sour tone like you have a parked wah on. The bridge pickup has a little more bite and spank to it. With some gain you can get good classic rock tones from the bridge pickup. These pickups can handle more gain than a set of PAF's could. Because of their modern design they retain their composure longer than a set of old pickups could.

This guitar is more of a collectors item because of its price. But if you are going to play it it is a great guitar. It is a super accurate replica of a late 60s SG guitar. Its light relic finish is not over the top like some finishes and really looks like a guitar from the era that someone cared for. Since this is Gibsons Custom shop the quality is seccond to none. If you are looking for a great limited edition SG for your collector or are a brave person who will play anything or even just a Doors fan this SG is a great replica of a guitar from a very specific era.
Did you find this review helpful?yesno
»