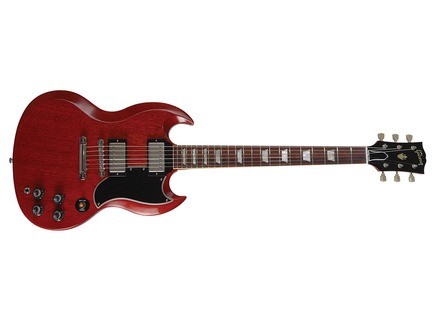 Made in Nashville, USA.

It's a VOS (Vintage Original Spec) guitar so it's manufactured with exactly the same parts and specifications as in 1961/1962.
It really looks wonderful. The aging is great.
The case inside is padded with a superb burgundy velvet.
With this guitar you immediately feel the 60's, much more than with my '61 reissue.
Compared to the '61 reissue, there is no socket for the bridge which is directly screwed on the top, the machine heads aren't exactly the same, the head is slimmer, the pickup mounting rings are higher so the pickups are very close to the strings, and best of all is that the "Les Paul" label on the truss rod cover on the head is the same as on the 1961 and 1962 Les Paul and SG models.

It has the slim 60's taper neck, and access to the upper frets is very easy like with every SG model.
The neck joints the body at the 19th fret (15th fret on a modern SG standard).
The body is slim like on the '61 reissue but the guitar seems to be a bit heavier... but it's still lighter than most guitars.
This SG standard VOS is very well-balanced. That's a good point for guitarists who move a lot on stage, and it also allows you to play for hours without shoulder painÂ…
Since the pickups are very close to the strings, it can be difficult at the beginning to find the right pick position without damaging the burstbuckers. I only mention it to add a small negative point to this review...

The guitar has a killer sound...
It sounds much louder than my '61 reissue because the burstbuckers have a higher output level.
The clean sound is quite round although my amps aren't conceived for clean sounds... it's very versatile and it gets even better if you amplify the high frequencies and shape the mids ...
The distortion sound is awesome, it's 100% rock, exactly what I was looking for...
The sound isn't fat, it's accurate and vintage. It's difficult to describe it in words. The best thing to do is to test the guitar!!
The overall tone sounds much more vintage than the reissue and it's good so! Even my Mesa Dual Rectifier can sound vintage! and with my Marshall Plexi 1959...
The guitar produces a long sustain (probably because the bridge is directly screwed unto the top) and it can be a bit disconcerting in the beginning, but afterwards it's magnificent...
Compared to the '61 reissue, the VOS sounds more like the 60's (and that's why I bought it).
You get the impression that it's a pretty, little, nice guitar, like a sweet grandma. But you'd better not mess with her because grandma can become very wild...

I owned a 2004 SG standard, now I have a SG 61 reissue, a SG 61 reissue antique ebony (GOW 6) and a SG Standard VOS and I can say that the VOS is more fun than all the others (although I already found the 61 reissue extraordinary and it's a very good guitar that I play often).
This guitar is a delight because it's easy to play, light, slim, balanced.
The sound is also great, very vintage even with a modern amp, it has a lot of sustain. It's a sound that you can't get anymore. It's very accurate even with a fat distortion effect (crunch, rock, metal, everything is possible!!).
The look is wonderful as well as the aged finish, the "Les Paul" label on the truss rod plate, the wood... Everything evokes it's origin...
The price?? The price is not so high as you might think.
I recommend anyone looking for a SG vintage sound from the 60's to buy this guitar (it's difficult to test it because the store must order it from the Gibson Custom Shop).
Did you find this review helpful?yesno
»