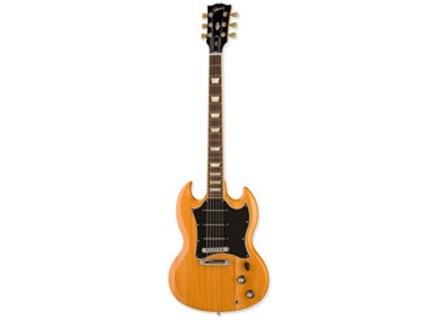 Gibson [Guitar of the Week #10] SG Standard w/3 Single Coil Pickups
3
This SG is part of Gibsons guitar of the week series. With the guitar of the week series Gibson would make a new limited run of a guitar every week. The SG was first created in the early 60s to replace the Les Paul. For a few years this was marketed as the new Les Paul. They wanted this to replace the Les Paul with this model because it was cheaper to make with its flat top. Later on they brought back the Les Paul and called this the SG. This guitar is a pretty strange SG with 3 rain single coils. You can get some twangy sounds with this guitar but the pickups are not really in the right position to perfectly emulate strat sounds. It has a master volume and a master tone with a 6 way chicken head pickup selector. It has a 50s style neck with an rosewood fretboard and 22 frets. Other than the electronics it is your basic SG

The upper fret access on this guitar is as good as any SG. The double cutaways proide good upper fret access. The thin body is light and easy to hold. One problem SG's is that the neck is mounted far out on the body and with the body being thinner than a Les Paul the guitar is slightly neck heavy. When you are standing up and playing the neck may want to drop down and you may find yourself holding the neck up. And what a big neck it is. On this model they used the 50s neck profile. The 50s neck profile is called the baseball bat neck in the industry. It provides the best tone but it can be hard to play if you have small hands. With the unlabeled chickenhead knob you can sometimes forget where you are.