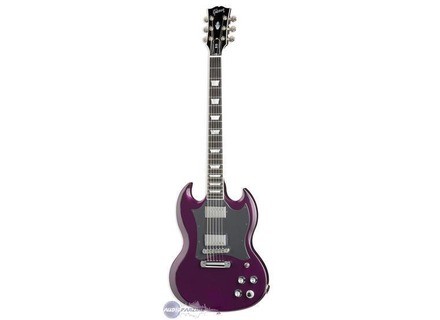 ShowMeHowToLive's review (This content has been automatically translated from French)" A good Gibson, the robot and more"

Gibson Robot SG Special LE
5
Made in the USA. 22 frets, black finish, 490R and 498T pickups, neck type 50's so larger than a 60's Les Paul, an SG classic settings with a push-pull in more settings for the robot. Jack connection on the bottom like Les Paul.
Comes with an AC adapter and AC / jack for charging.

Using a Gibson Robot is not super intuitive. Gibson wanted to make the robot function transparently and therefore there is no screen or lots of buttons, a single button push-pull knob is used to control all the features, as saying that without reading the manual it is difficult to control the beast!

Change tuning is done rather quickly even if it means scraping the strings, it is done in silence, only the tuners are heard when they turn.
Add your own tuning is a bit cumbersome since there are no screen, you have to memorize the colors of the LEDs and their numbers.
It's still very nice to add his tunings and switch from one to another so quickly, I think it changes your life when you play songs to very different tunings like Soundgarden, Black Crowes, Stones or Led Zep.
Be careful to change the strings, you must read the manual to avoid breaking the tuners that are specific (and much deeper).
Other than that, for the rest, this is a classic SG, the robot functionality is well integrated, it is remarked on before by push button pull a different color.
The handle is a SG, thus wider than the first frets Les Paul Standard. Access to the treble is very good on an SG, the ergonomics also, it plays perfectly seated, this is not the buche Les Paul!
The handle is simple without binding and without trapezius but the overall finish is perfect, no defects, no buzz, it's good made in the USA with a good box Made in Canada

The pickups are classic Gibson pickups, the robot does not change functionality, it is by piezo pickups in the tailpiece.
These mics offer good without hiding panel gibsoniens sounds and good fishing, I find them even better than my Les Paul, over fishing and a beautiful grain. The guitar sounds good vacuum.
I play with my Spider Valve Mk2 and with lots of different models, it goes well everywhere. This is a Gibson with Gibson's what

She did not disappoint.
on the other hand, changing pickups looks to me more complicated than a conventional SG due to the electronic robot.

I use it for a few days. I bought it not for the robot functionality but because I wanted a Gibson SG and the robot are rated very low and the price is very low, I got it for the price of an Asian model , so it was worth it. There are bargains to be found on the Gibson Robot which often go 1/3 of their original price, they are often sold off in in-store specials.
I love the robot functionality, for now, it works well, to see over time ... For the rest, it's a good SG with good microphones and good sound.
The value is unbeatable bargain price, on the other hand I would not put the price in the new, it is still not worth the shot.
The only regret is that there are no more options or settings screen to help but wanted a Gibson guitar, pure and simple and therefore the robot is well hidden, without the mechanical robot, it's still a Gibson classic!

fab hammett's review (This content has been automatically translated from French)" Whoa! gibson thank you!"

mache very pleasant because of its shape and its access to acute, however, to be honest the varnish sticks to death (the paw is 5 years then it's good!)
for me it is well balanced compared to my old Epiphone SG standard that I owned before.
his side is Excellent! sg is the standard for other SG tested, no difference, the tuning knob / high tone does not change, the Carbon pickgard either, so just to finish more luxurious next to a chery standard conventional choice was quickly made for me.
The ebony fingerboard is the top too. it slides on top and it ages well as more dense than rosewood.
I put that 8 because of the varnish that sticks like many new Gibson too

side of the bridge is AC / DC while spitting in Neck can be found on its warm but not acute enough for my taste as the les paul to send to slash solo.
but it is an SG! less fishing, sustain less acute but access to acute revived me as it persists in a bind to a les paul (even Slash in Tokyo he shat! good thing since it makes the gonflette!)

I have 3 years, I tried an SG standard and a reissue before falling in love with the one. the standard is very good, because the purists prefer the color red mahogany has been standardized so they can not conceive otherwise this guitar at the beginning .. to be honest, even me at first I asked the seller if he did not have the same standard robot but chery .. after the reissue was very good but its cushy older. unless fishing is not what I expected .. unless they build a bridge in Angus Young ...
Of course the big plus:
Robot system works perfectly, never had a problem. well you just charge the battery up and the strings (very easy on this model)
what is amazing is that over the strings fart ever!
within seconds the guitar is granted, drop in flat, open ect .. we just set the intonation of the guitar via its tuner tell us what to do with our screwdriver. it's wonderful that we have been able to design a guitar of such quality and incredible technology.
I say thank you gibson
Did you find this review helpful?yesno
»

for ergonomics is an SG with all its qualities (and defects)
by weight against the much more important is when m ^ me not up to a Les Paul.

tuning issue, it's that everyone is waiting to hear opinions, and although the system fontion very well. the tuning of each string is quite precise. (Despite the fact that the tuning is done only once, it is often necessary to scrape all of the strings 2 to 4 times, but hey that's normal)
Open, Drop, acccordage continuous ... Not bad!

Unfortunately it does not take very long. a small bend and hop réaccordage necessary and not least (almost 1/2ton less).
(Y t it would have a defect in the mechanics??)
ago about the possibility of making adjustments manually to eventually change

She possesses a priori that the same micro SG Standard 490R 498T, but I do not recognize at all, unless fishing, SG The grain is not at its best is back (I was able to directly compare )

more than a little concern on the one I tried, tona of the bridge pickup was not working properly, were thoroughly acute in middle position (and therefore more serious sides of each??)
this is a setting that I have not found? (Knowing that this button is specific to the auto tuning, and no double knob, so everything is managed by electronics)

For my part I will not do this investment just to avoid dealing with two mechanical
the concept may be nice, but not in (at least on the one I tried)


2 sg Cote (standard / robot) to score the robot does not measure up
Did you find this review helpful?yesno
»

chocopopz's review (This content has been automatically translated from French)

Gibson Robot SG Special LE
5
Made in USA. 22 frets, 490R and 498R microphone, the classic humbucker as found on most Les Paul or Flying but not fundamentally different. When one has tasted the emg ... but hey, it's great classic sound heard a million times on discs.

No floyd, no bigsby (injury). Comes with a super safe Gibson and charger, but requires a power supply purchased separately, 12v 1.2A (with the + middle). J'utiise me a Hong Kong style PSU has 10 bullets and it works impeccable.

Robotic tuners seem a little big for the player, but viewers do not notice. In any case they are not heavy. Just a little bulky and not very "vintage". The tuning knob is him outright ... magic irradiated science fiction block. It serves as tone control when it is pushed back (whew).

Channel classic, not too fine, not too thick, rare woods, but not as nice and as fast as the (good) Fender. Mine is Cherry, classical classics. Although the varnish will take 10 years has really dry (and being good!). It will remain a bit "sticky" for a while.

The big plus for OS: access to high boxes, weight, much lighter than the LP.
Minimum: no table curved, so a little less grain or a resonant LP.

Well, I mainly took the robot to automatically change and rapidos tuning. Switch to Open G for the Stones, opened to the Zep, down half a tone for the Hendrix back to normal ... . It works with the fire of God!
In less than 15 seconds tuners are the good grades. By checking with a tuner Boss TU-2 and TU-80 we see that the tuning is ... Impeccable! A real madness and a huge inspiration to discover amazing tunings. I spent so much time has set my guitars in that time, I am edified by the facility. How to play Karma always granted immediately. It is monstrous.

A charge lasts for over 200 tunings: What abuse!.
Never broke a string re-granting (I am still on the calibration 10-46).

Sounds great on the coarse-grained amps (Marshall, Mesa) but can be ultra-fine on the Fender or Vox. The acute course are not the caliber of a simple bobi.

I am pleasantly surprised by the balance of the sounds of strings. All reflected in the agreements, not boiled, really heat. Big definition.

This guitar loves pedals and does not lead blast or buzz.

Oh la la, yes I would do this choice, especially the SG which is cheaper than the others (LP, Explorer). It's expensive, it's stylish, but when you bump, that is c. ... at work, here's a clearing with a beer and a good friend ... (The uh I digress ...) I do not get why she doesn't commercial (they say).
I adore. It is a revolution p'tite this thing.