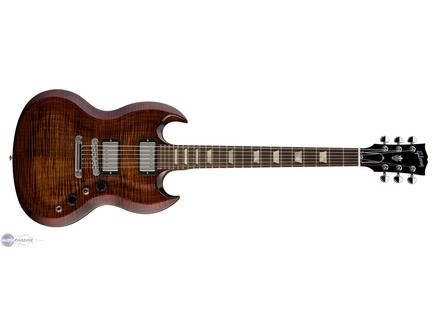 Gibson SG Carved Top
4
The Gibson SG guitar isn't easily recognizable guitar primarily because of the body shape that a pass. It has a double cut away corn shape the body which almost looks like devil horns. It's a unique shape in a unique style but it's pretty easily recognizable since its origination in 60s. It had a great sound and fixing on that is very usable for hard rock and metal tones. It features mahogany wood for the body into the neck and you get a Rosewood fretboard. This one has a cool carved top that is different because is basically is carved instead of a flat service body.

You get a get a nice thick chunky tone that's very conducive with the humbucker pick ups installed in this guitar. You have two volume control knobs and two tone control knobs. You also have a pick up selector and that is pretty much about it as far as features go. The body sheap is thinner than a Gibson explorer or a Les Paul guitar. So we can get is a little bit thinner tone but you still get a great rich and full bodied tone.


These guitar sits frequency wise very well. I think because of the thin body shape in that it has a nice frequency range that cuts through any band mix or any recording session. I've always loved using the Gibson SG guitars in a recording session primarily because they carried a good midrange focus that is easily picked up in a recording microphone. These guitar sound fantastic a live setting as well. Just ask Angus Young of AC/DC because that guy played this guitar pretty much exclusive throughout their guitar playing career. These are great guitars and for the money it doesn't get much better than this.


These guitars can be ranging from anywhere about $800-$3000 or so. But usually they have hang right around the range of $1200-$1500. Especially the 62 reissue versions. That is in my opinion the best version to get of this guitar because it carries a nice weight balance and feel that you would expect from this gets an instrument. Plus the carved top is cool too. I highly recommend these guitars because they have a great feel and I are certainly a players choice for live use or recording.

pierrot36's review (This content has been automatically translated from French)

The guitar rock n roll! guitar hero of the very high end
and with caractière! unlike versatile guitars
to scratch very experienced
already empty it sounds to hell (if one has the feeling! anyway)
killer guitar, armed to the riff, bluesy sound of the Mississippi
armed for rock, hard rock, heavy rock, metal too
s one of the most versatile guitars!
timeless and with character unlike many of my music man possessed

I've had for 2 years
She is so beautiful that I dare not play with out of home
2200 euros!
is the price of the exception