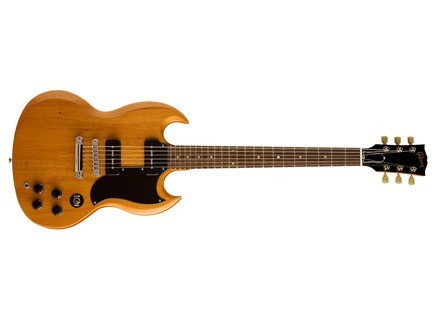 Gibson SG Special '60s Tribute
4
The 60s were a pretty awesome era for music gear, and it was also an interesting point in time for Gibson as a company. The 60s and 70s are actually the guitars you mainly hear in recordings, but since everyone gets all bent up over the whole Norlin thing, Gibson decided to do a 60s reissue instead of the 70s, I guess. The guitar features a mahogany body, a mahogany neck with a rosewood fretboard, 22 medium frets, dot inlays, a hard tail bridge, two P90s, two volumes, two tones and a three way switch.

The frets on this were actually pretty good. Gibson isn't exactly the best company when it comes to fretjobs, but these were very solid. I was able to get some nice action without any fretting out. Granted, I had to tweak the guitar a bit to make it play the way I wanted, but it came out pretty good. The nut could have been cut better as it was kinda binding on the G string, but I was able to temporarily fix that with some nut sauce. The guitar had the standard neck dive issue that SGs normally have. It's almost as if every single SG has this issue. In fact, I dont' think I've personally come across one that played normally.

The P90s in this were very good sounding. The bridge was aggressive, but it wasn't over the top. If you've never played a P90 before, it's like a thicker single coil sound. You can get a really cool blues tone with this, especially once you start adding some gain. I plugged this thing in a JCM800 2203, threw a tubescreamer in front, and it was tonal heaven. I was able to get everything from BB King stuff to Zakk Wylde. The P90s actually did a pretty good job when it came to getting hard rock/metal tones, but they can't really get much past the old school 80s metal. Don't expect these to do death metal, although some guys out there are actually making them work.

The guitar is a very cool guitar, and it happens to be one of my personal favorites when it comes to SGs. The P90s are great, but I know they'll turn off a lot of people from this guitar. If you're unsure about P90s, I would urge you to at least try them to see what they're like. You may be pleasantly surprised. I know I was when I first picked up a P90 guitar way back when.

I should say up front that this was on sale and that's why I bought it. I'm not normally a fan of the SG body style. It kind of seems neck heavy most of the time and my body doesn't shape to it very well. For some reason I feel like I have to play rhythm on one, which is bad for my style. But hey old habits die hard. I really like the neck shape on this one and it definitely has the 60's vibe down. Actually my had had one of the original 60's SG guitars with the same finish and I can say this one feels very similar. The playability is there. It's very much a fully featured guitar and not budget by any means despite what the price might tell you.

I'm not sure what specific model P-90's are on here but they sound very good. Really dirty and raunch. I believe they are the same ones that were on the limited run of les paul specials that came out last year. In my opinion these sound way better with p90's than humbuckers...it's just something about the guitar. I really feel like I can jam out when I play this through a cranked amp. I think a lot of P90 guitars give that feeling. This is a true plug and play kinda guitar. No bells and whistles.

Yeah you don't get any of the fancy detailing on the higher priced models but this is every bit the SG that you could want. Plus you don't really have to worry about messing up the beautiful finish or hardware. This is a real beater axe as far as I'm concerned. And I have no problem taking it on tour. The tuners are solid and everything seems fine. I really recommend you pick this up if you want a no frills SG on the cheap.

Gibson SG Special '60s Tribute
4
The Gibson '60s SG Tribute was made after the launch and subsequent super-fast sell out of the Les Pauls of similar nature. It combines some great features into a well priced and great feeling/sounding guitar. This particular model boasts a really classic natural finish that harkens back to the days of when things were still called "groovy" and when Hendrix was still playing the music, man.

It's made in the USA and features a mahogany body and neck, a rosewood fretboard with 22 frets, Kluson tuners, a tune-o-matic bridge and stopbar tailpiece and two really awesome Gibson P90 pickups wired as a typical SG would be with two volumes, two tones and a 3 way toggle switch to select the pickups. Definitely a guitar that would be right at home in 1971 as it is right here in 2011.

The SG is a pretty ergonomic ax for sure. It's light, sits well on the body and really allows you to fly around when you're playing. They're not quite featherweight, which is probably a plus. I know that when I'm playing a Gibson I like it to feel solid and secure, which this one does without completely killing the ol' shoulders and back. The upper fret access is good on these guitars... superior to something like a Les Paul due to the double cutaway and smaller neck joint.

Getting a good sound out of this guitar is pretty simple. The thin finish combined with the raunchy P90 pickups really is a recipe for good tone and Gibson makes it with just the right extra bit of mojo... groovy man!

I've tried this guitar through a myriad of different rigs. It definitely sounds most at home on a British voiced amp such as a Marshall or Orange, or even an American imitation like the Mesa Royal Atlantic. The clean tones are really cool... they're a bit raunchier than a typical humbucker, but they also have that brightness that one might associate with a Strat or Tele... pretty cool! The neck pickup works very well for blues or R&B stuff, and the bridge pickup is a funk machine. Putting both pickups on together is like hearing the love child of a Tele and Les Paul.. country twang with mahogany midrange tones.

Kicking in some drive is where the fun starts to begin. I've always dug P90s for their awesome sustain and tone and I love how these pickups react in this guitar. They take on a really thick and monster vibe that is like a perfect blend of a Tele and a Les Paul Junior or Special... excellent for punk rock or proto metal. Using the neck pickup yields in some Sabbath-y textures that would make any doom metal fan fall to their knees, Wayne's World style.

All in all I think the Gibson SG '60s Tribute is a really cool and classy guitar. It sells for about $850 new which is a killer deal considering the quality and tone that you get for your cash. It's a limited run, so I'm not sure how many will be floating around for sale in 10 years. It seems like the type of guitar people will buy and play as it just keeps sounding better and better each time I play one. Definitely worth checking out if you're a fan of SGs, P90s, or a good ol' fashioned raunchy guitar sound.

Gibson SG Special '60s Tribute
4
The Gibson SG '60s Tribute is a branch off of the infamous Les Paul '50s and '60s Tribute Studios, which were loaded with killer features at a great price. The SG '60s Tribute is for those players who are just more a fan of that devilish delight. It is part of their faded series and features their famous thin finish that consists of pore filler and a few light coats of lacquer over top. It features all mahogany construction (body and neck), a rosewood fretboard with 22 frets and dot inlays, and a pair of firebreather Gibson P90s loaded under the hood. Here's the full list of specs:

The SG has always seemed to be a very light and ergonomic instrument to me. It sits on the body well and they are usually light in weight. This guitar is no exception, and because it has the '60s neck profile, I feel that the body and neck match together better size-wize than it would if if had a '50s neck profile. The upper fret access is golden on these guitars... much like the PRS' I've tried.

Getting a good sound out of this guitar is really simple. It has P90s in it, which I'm a huge fan of and would argue that if you can't get a good sound out of a P90 loaded guitar then I'm not sure what to say! They're like the perfect step between the bright and jangly single coil, and the dark and complex sounding humbucker. Overtones just leap from the pickups, and combined with the all mahogany construction of this guitar, it just makes for a very thick and juicy sounding instrument that works well for many different styles.

I've tried this guitar through various Fender and Mesa Boogie amps and can safely say that it's more than a one trick pony. The clean tones are an excellent blend of the bright and jangly mixed with some darker and thicker sounds to create a wonderful tone that's unique and all its own. It works well for jazzier/bebop lines as well as comping chords quite well, especially though a good Fender amp. The combination of both pickups is prime time for country pickin' and the bridge pickup has that perfect amount of bite for styles like rockabilly and surf guitar.

The drive tones are thick and viscous all around. It sounds like a Gibson that is trying to respond like a Strat and that marriage brings to the fore a really thick and chewy, yet still bright and distinct drive tone that is PERFECT for 70s and 80s hard rock flavours as well as some doom metal and even some modern rock. The guitar has a great underlying smooth quality to it as well, so lead lines just sing for days... add some echo and reverb and it's perfection.

All in all I feel that the Gibson SG '60s Tribute is a great axe. It doesn't look like too much from a distance, but in my experience some of the greatest sounding guitars ever were the plainest of them all. It combines that understated yet subtly classic look with a monster set of tones and excellent playability. For the $800 or so these sell for new, you cannot go wrong. If you want a killer P90 guitar but missed the boat on the limited edition LPs, you might want to take a look at these before they're gone gone gone!

Did you find this review helpful?yesno
»
Read the 13 user reviews on the Gibson SG Special '60s Tribute »