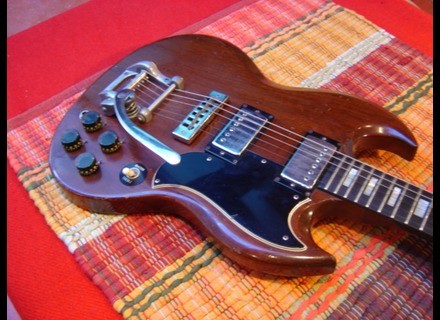 SG power's review (This content has been automatically translated from French)

Poses a handle genial good, finally slipping a short dir nothing about what is manche.Pour Game bin c is the access to acute SG is more than easy! Its weight unlike other gibson sg is very much returned c is a dir that when one is in position "standing" it did pa trend leaning on the side of the head his body is in one piece (which is very rare!) the sound is typical of 70 years is c to say that a less powerful current sg standard, so the sound is much warmer moin last draft brief but happiness!

Entant a fan of ACDC I play on a Marshall JTM 45 connected with a Soldano GTO pedal for rhythm and a pedal Tonebone Hot British (I play so that the lamp with no parasitic transistor is my sound!) Connected to the sound of amp itself (without the crunch fair) i have come a very clear sound (unlike the SG Special and standards) has grown fon (amp) the sound keeps its side Crystal clear with a lot of fishing and sustain.Le only problem is c this guitar is old it is no longer sold new state al (mine being 74) mics so it is the old arsene just when I use a big disto.C is clear that this guitar is made to play good vieu rock it slightly to suit every style but also has a fender telecaster I lean more to the guitar when he s acts of using a clear (even if the SG and really great)

I have been using the 1 year because I'm the one offered on my shot foudre.Elle coutée 3000EUROS in a luthier collectioneur.Possedant already have an sg special day a little hesitant but the neck of this guitar is much thinner and I especially told myself that a guitar like that we find pa every day (especially with a Bigsby) c is a guitar not a guitar collection to jump in all directions and make the con with c is a beautiful princess that I have decided to awaken (the luthier has TElement that most of his guitars have not etées n played for a long time) If you are lucky enough to find one like me do not hesitate! The price does not scare me is c j's why I jumped and as they say when you love it does not count!