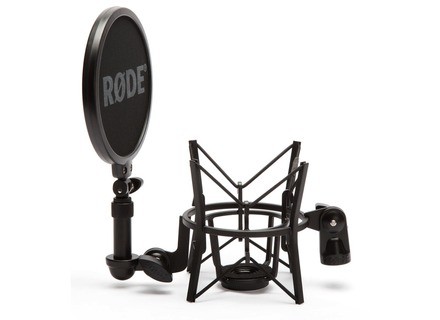 View all offers for RODE SM6 »

hhub17's review (This content has been automatically translated from French)" effective, solid, reassuring"

RODE SM6
5
What kind of microphone: Rode a NT2A static transistor, which I use at all (multiple directional, high-pass filter attenuator ... and I do not have another microphone) so singing cajon through the acoustic and electric guitars, bass, tin whistle ...
This suspension is now included with this microphone, but not when my purchase, I have deeply regretted, especially since I have a home studio with an unstable floor.
It is an elastic suspension, as shown in the picture: an outer frame which is on the foot, a resilient holding a carrier in the middle, wherein the microphone is screwed.

I use it for about 6 months and had tried before buying anything, but consulted the internet, and I excluded supports "no name" on feedback that it lacked strength, or Sustainability elastic. Do not want to blow my only mic for a lousy suspension.
I like most solid and reassuring aspect, and the fact that nothing of ground motion is not transmitted to the microphone now (that's his job, OK, it's a suspension). In addition, I have read in various reviews on other suspension assembly difficulties with a particular microphone, which played in my choice of a suitable suspension, according to the manufacturer itself, in my micro .
Value: not bad, it was more expensive and probably better, but that's enough for an amateur home studio.
With experience, I would do this choice, even if the "reassuring solidity" part is probably the fact that it is the same brand as the microphone.